We abandon the Irish tradition of home ownership at our peril

The further we depart from this the more our cultural, institutional and legislative frameworks will have to adapt 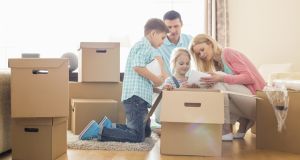 The mortgage lending rules brought in last year have polarised opinion. Proponents argue that a credit bubble wrecked our economy in 2008 and that lending restrictions are needed to ensure this never happens again. Others point out that the new mortgage limits have created roadblocks to home ownership for young people.

This is an oversimplification. In reality few commentators fundamentally object to credit restrictions, because they understand that lending people more money to compete for a fixed number of properties can only drive up prices.

However, it is also valid to point out that, while loose credit would fuel house-price inflation, lending restrictions will not necessarily prevent it. If owner-occupiers cannot get mortgages they must rent. In an undersupplied market this drives up rents and yields, attracting investors who compete for properties. Therefore prices rise anyway.

Given the prospect that the mortgage rules won’t ultimately contain house price inflation, it behoves us to consider what they will do. Already one thing is clear: these rules are contributing to an increase in renting. Data from the Residential Tenancies Board shows a sharp rise in both tenancies and renters since mortgage lending was tightened, while with low interest rates and rapidly rising rents the number of landlords has increased by 12,600.

Indeed, according to a recent Harvard study this approach has delivered household wealth despite booms and busts – even when properties were overpriced.

Tighter lending is just one factor behind increased renting: family break-up and weakened household balance sheets are also relevant. But insofar as the mortgage rules are contributing to this tenure shift they are regressive. People with less capital are being denied the chance to invest in what would traditionally have been their most valuable asset. Meanwhile, investors who have wealth are appropriating these opportunities.

Sadly, this inequality is set to grow further. As we predicted 12 months ago, landlords who bought with cash during the downturn are now expanding their estates using mortgages secured against their earlier investments. Investors now account for the fastest growth in home purchase drawdowns and, over the last 15 months, a steadily increasing proportion of investor purchases are being funded with mortgages.

While the banking system is working against homeowners, therefore, it is working for investors.

Our tenancies legislation was designed for a society in which people rented temporarily before progressing to home ownership. Its unsuitability for regulating longer-term renting is already becoming obvious. Current pension arrangements assume people have bought and paid for their homes by retirement. But as we move towards longer-term renting, pensions will have to fund ongoing accommodation costs in retirement. Savings and investment behaviours will also have to adapt. Older people could, traditionally, unlock housing equity to cover medical expenses. But, without accumulated housing wealth, long-term renters will have to insure against these risks or fund them by other means.

The Central Bank is now accepting submissions before reviewing its mortgage lending rules. This is welcome. But what we really need is a more integrated approach to housing policy that co-ordinates the actions of all departments and agencies in pursuit of shared policy objectives.

If any positive can be taken from the current political chaos it is the bipartisan commitment to establishing a dedicated housing ministry which could facilitate this kind of joined-up thinking.

John McCartney is director of research at Savills; Lorcan Sirr is a lecturer in the school of surveying and construction management at the DIT; and Karl Deeter is compliance manager at Irish Mortgage Brokers