Vincent Woods: It’s not such a long way from Calais to the Irish coffin ships 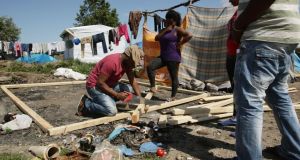 A man building a shelter in the migrant camp in Calais, France. Photograph: Yui Mok/PA Wire

The landscapes of emigration, migration, exile and return are complex ones of loss, enrichment, suffering and enduring hope. Every time I hear about the desperation of migrants in Calais, or the rescue of migrants in the Mediterranean, I think of the Irish people who risked everything on coffin-ship journeys to the new world of America. Every time I hear of the deaths of migrants by drowning, hunger or exploitative neglect I think of our ancestors who drowned, starved and died on sea and the stray sod lands of this country. Only a blink of time separates them from the people fleeing Libya, Syria and Sudan; only an accident of geography separates us from those people who look to Europe as a beacon of hope, prosperity and freedom of a sort. If we lose sight of our shared values and parallel historical experience in this modern human catastrophe, then we lose part of ourselves and the core instinct of constructive empathy that has long defined some of the best qualities of Irish people.

The recent decision by the Irish Government to accept hundreds of migrants from the Mediterranean crisis to this country is welcome and necessary, though this number of people would scarcely fill one of the many dying towns of the west and northwest. I found myself thinking about these anonymous women, men and children recently as I waited for my brother and his twin daughters to come “home” from the US. Scanning the faces at Dublin airport I wondered how and when these new Irish will arrive here, who will meet them, what support they will receive, where they will settle. Do they all speak English? Will their children learn Irish? What have they witnessed and endured, and will they forge a strong new life out of suffering and survival?

I had never thought of my family as one affected by emigration; then a young photographer contacted me to say she was working on a project documenting the experience of emigration in and on Irish families, and would like to speak to me and make a small photographic record of my brother’s return. This set me thinking about what I realised was a deep pattern of departure, grief, renewal and connection across generations of both my parents’ people. Many of them passed through Ellis Island, many negotiated life in the English language, their Irish seeping away, some drowned in the Hudson, an uncle left for Chicago at the age of 18 and never returned.

There was an enlargement of life as well as a diminishment in these migrations and occasional returns; I was named after my Aunt Rose’s husband Vincenzo Clemente or Vincent Clements, a second-generation Italian man she met in Manchester. His presence in 1950s rural Leitrim raised an eyebrow or two until he proved his mettle as hay maker and pint drinker, different and equal, accepted and eventually deeply respected and loved. The splendid music of John McKenna and Michael Coleman might have been lost to us but for emigration and the early recording opportunities of 1920s America; many of the photographs of people, lives and landscapes of 1940s and 1950s Ireland were taken by returned “Yanks” who unwittingly captured a now vanished world. And where would we be without jazz and the fused lives of Irish- and African-Americans in the US – an immensely rich story yet to be told in full, yet to realise its potent creative potential.

But for all the welcome and necessary expansiveness that comes from the journeys and the new lives, the raw pain of separation and displacement is also a potent and universal force.

As we think of those who will come to this country and those forced to leave, it is worth taking time to reflect on the lives and feelings of those who stay, the mothers and fathers, sisters, brothers who choose the familiar terrain of home, whatever its poverty or challenge, whatever war is tearing down its houses and changing its shape. The ones who stay “home” are often custodians of the past and the shapers of hope for the future. They may never cross whatever sea divides them from their kin, and no technological revolution will connect them across unknown zones of conflict, conflicted emotions and the indefinable distances of sundered community hope. Their pain is often quiet and unacknowledged.

In his book I Have Seen the World Begin, Carsten Jensen describes meeting an old man in Vietnam who said to him, “Poems are the memory of the world.” Jensen describes his travels in China, Cambodia, Vietnam, and in all his work considers the journeys humankind makes in search of better lives, freedom, hope; he concludes that for all his own journeying, his deepest insight into life was in witnessing the birth of a baby – in seeing the world begin. The birth of a baby girl on board the LÉ Niamh recently reminded me of that miraculous, poetic possibility – a new world beginning, a cycle of hope set in train.

As I embrace my brother and my nieces I will think of those desperate, hopeful people on the blue and often bitter seas of the Mediterranean. They are our sisters, brothers, nieces, ancestors, our destiny and the store of our future.

Vincent Woods has written many poems on themes of emigration and return, some of which will feature in a series of Leitrim Equation performances of music, song and poetry from October. Email vwoods@eircom.net Diarmaid Ferriter is on leave