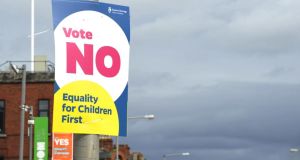 ‘The late-starting, underfunded No campaign that transcended denominational barriers fought respectfully, bravely, and nobly in the best Irish tradition that led first to Catholic emancipation, then to the great missionary movement of the 19th and 20th centuries and finally to an independent Ireland.’ Photograph: Aidan Crawley

The marriage referendum was, paradoxically, won/lost thanks to the best in Irish Catholicism. The Yes vote was due to an outpouring of that humanity and sympathy for the underdog that sent thousands of Irish missionaries (and more recently NGOs) to every part of the world. It makes us the most generous of nations in giving whenever a catastrophe strikes.

The Yes vote was to some extent the vote of the older generation, shocked to the core by the clerical abuse scandals, whose children, grandchildren or friends and neighbours are known to be “gay”. The intervention by former president Mary McAleese in the closing stages of the campaign found a powerful echo in many hearts. So did the testimony of journalist Ursula Halligan.

It was the dramatic climax of a whole series of celebrities and politicians coming “out”. In the end, the issue had been reduced to a vote for or against people who are gay.

The same sympathy was felt by a younger generation otherwise generally cynical about traditional sexual mores. Their natural idealism was ignited by the appeal to “equality” and “human rights” made by the Yes campaign.

The widespread attitude that, sexually speaking, anything goes between consenting adults played a not insignificant role. Then there was our postcolonial inferiority complex (always looking for the approval of outsiders) that foreign interests fed into by both intimidation (threats about how the world would see a No vote) and flattery (how the world would approve a Yes). And yet, the overriding reason for the Yes vote, it seems to me, was sentiment. It trumped reason. As the French say, one can be too kind-hearted for one’s own good – in this case, the common good of society.

The spokespersons of the No campaign won the public debates. They had reason on their side, the bedrock of society. But they failed to touch the hearts of the electorate. And in the end the heart triumphed, thanks to what is best in traditional Irish Catholicism. But an inherent weakness in Irish Catholicism was even more evident: conformism resulting from the lack of critical thinking and moral courage. Observers have noted that when it comes to physical courage (as in sport or soldiers) few can beat us. What is often lacking is moral courage.

Honesty, truthfulness, and endurance in the face of the majority who think differently are more associated with Irish Protestants than with Irish Catholics. The weight of the establishment drowned out the small, still voice of critical reason trying to assert itself.

The entire Yes campaign – but especially the endorsement of all the political parties and trade unions, the involvement of elements within the Garda Síochána, the muscle of big business, the failure of an ex-president to remain neutral, the irresponsible musings of Mr Justice Cross and above all the media’s partisanship – was intimidating. How many of the 40 per cent of those registered to vote (more than 1.2 million!) failed to vote because they were intimidated?

The Irish Human Rights Commission twisted language in order to present as a “right” what that European Court of Human Rights refused to recognise as such, namely a “right” to same-sex marriage. That body, with its LGBT sympathies, will in time become Big Brother watching us, lest we deviate from its basically irrational agenda.

What we call traditional Irish Catholicism is a cultural product that, as I have argued elsewhere, is neither truly Irish nor authentically Catholic. It is the byproduct of the historical circumstances of the 19th century, when its attitude to the body and sex was forged under the dual influence of Protestant Puritanism and a Catholic moral theology that tended to be rigorist.

Sexual permissiveness is, in large part, a reaction against such an inhuman attitude. Not only has the church failed to present a renewed vision of Catholic sexual morality based on chastity and fidelity as the virtues which deepen love and protect family life, it has failed in the most elementary catechesis, not least that on marriage.

Those failures were evident in the mixed signals being sent out in the lead-up to the referendum. While individual bishops issued balanced and convincing pastoral letters, some prominent clerics either advocated a Yes vote or were perceived to vacillate. The media coverage of the synod of bishops in Rome last October gave the (false) impression that the church’s teaching on homosexual relations would change. Pope Francis’s easily misunderstood quip (“Who am I to judge?”) played into this impression.

The Extraordinary Synod itself revealed a fissure running through western Catholicism: a new ambivalence about sexual morality. It has its roots in the effective rejection by the west of Pope Paul VI’s encyclical on birth control, Humanae Vitae. Acceptance of contraception leads inexorably in time to the acceptance of same-sex acts and artificial reproduction – and so to same-sex marriages – because it deliberately separates sex from procreation.

Considering all these factors, it is astonishing that almost three-quarters of million voters – four in 10 of those who voted – said No.

Reason and courage prevailed. The late-starting, underfunded No campaign that transcended denominational barriers fought respectfully, bravely, and nobly in the best Irish tradition that led first to Catholic emancipation, then to the great missionary movement of the 19th and 20th centuries, and finally to an independent Ireland. On the whole, bishops responded with pastoral sensitivity to the campaign. These are solid grounds that give me hope for a brighter future for the church and for Ireland as a whole.