Vincent Salafia: National monuments must be protected by clear laws 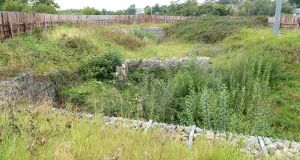 The site of Carrickmines Castle, in Co Dublin: the omission of any reference to its national monument status from the Carrickmines Conservation Plan highlights the urgent need for review of heritage policy. Photograph: Cyril Byrne.

Thirteen years ago, a small, diverse group of concerned citizens called “Carrickminders” entered the site of the Carrickmines Castle, south Dublin. We aimed to prevent the imminent demolition of roughly half of the newly discovered national monument, to make way for the M50 motorway.

After we won two successful Supreme Court injunctions, then minister for the environment Martin Cullen rushed the National Monuments (Amendment) Act 2004 through the Oireachtas, described as “emergency legislation to enable work to resume”. Demolition of the national monument went ahead, after we lost our third Supreme Court case, and the M50 opened in 2005.

I have reviewed the 73-page plan, prepared by the council, the National Roads Authority (NRA), and the Heritage Council. There is one glaring omission; it fails to state that Carrickmines Castle is a national monument.

No document on the website states this, and I had to email the council to get additional reports sent and found the reference buried on page 279 of Vol One of the Excavation Reports .

It states: “The significance of Carrickmines Castle and surroundings as a national monument lies in its unique defensive outworks, its having formed part of the group of castles and linear earthworks forming the boundary defences of the Pale, and its uniquely large and varied selection of Leinster Ware.”

National monument status was central to all three Supreme Court cases on Carrickmines, which resulted in the Department of the Environment instructing the council to complete this Conservation Plan in the first place.

Omission of national monument status from the Carrickmines Conservation Plan highlights the urgent need for review of State and local heritage policy and the 2004 Act. The act was widely condemned because it was not limited to just Carrickmines, but it also empowered the minister to demolish every newly discovered national monument on every motorway route in Ireland, without an Environmental Impact Assessment (EIA).

It was used to demolish hundreds of national monuments that had been discovered by the NRA during road building, in order to deliver the National Development Plan. On one road alone, the N9-N10 (Kilcullen-Waterford toll road), 14 lesser-known national monuments were identified and demolished.

Later, in 2007 a rare wood-henge was discovered along the M3 motorway route, at Lismullen, beside the Hill of Tara. It was voted one of the Top 10 most important discoveries in the world in 2007 by Archaeology magazine.

The World Monuments Fund, which had placed Tara on its list of 100 most endangered sites, wrote to the minister pleading for its preservation.

The European Commission sent the government a “reasoned opinion” that the 2004 Act was in breach of EU law, and directed the minister not to demolish the site.

The European Commission took Ireland to the European Court of Justice (ECJ) over Lismullen and won, in 2011. The ECJ held that “by excluding demolition works from the scope of its legislation transposing the EIA Directive, Ireland has failed to fulfil its obligations under that directive”.

The ECJ decision was not widely reported and the Government quietly added new legislation in 2012 and 2013, by statutory instrument, bypassing parliamentary debate. The ECJ decision, condemning the 2004 Act, effectively overturned the third Supreme Court decision on Carrickmines, as well as the High Court decision, dismissing my case against M3 motorway at the Hill of Tara.

It also negated all ministerial orders and excavation licences issued for predemolition salvage works on all newly discovered national monuments, under the 2004 Act.

With a new set of major infrastructure projects proposed under the Capital Investment Plan 2016-2021, and sites such as Brú na Bóinne Unesco World Heritage Site potentially under threat, it is critical the proper legislation and policy be adopted, and remain in place this time.

The Draft Carrickmines Plan is a fitting starting point for a national debate on the matter, and all political parties in the general election should clearly state their positions in their election manifestos.

Public consultation on the Draft Carrickmines Castle Conservation Plan 2015- 2025 ends on November 6th. See dlrcoco.ie Vincent Salafia was a spokesman for the Carrickminders and TaraWatch groups. He is a former lecturer in environmental legislation and planning and risk assessment at Queen’s University Belfast