Unravelling the facts, and myths, of Irish inequality 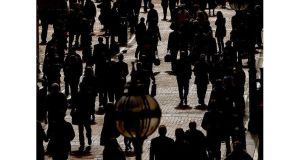 The broadly meritocratic nature of Irish society is evident in how people at the top in business, the public sector and politics come from all walks of life, and gives reason to hope that the sort of structural increase in inequality experienced in some other countries will not happen here. photograph: matt kavanagh

ANALYSIS:Contrary to popular opinion, Ireland is in line with the European average in terms of income equality

The gap between rich and poor narrowed a little in 2011. But new income equality figures, published yesterday, show that despite this seemingly positive development, there is in fact nothing to cheer about. The more equal spread of income happened despite an increase in most measures of misery, such as the proportion of people in deprivation.

Because of this apparent paradox, and because factors affecting income equality are many and complex (and thus often muddled), it is worth noting briefly how the spread of earnings is gauged before analysing what has been happening to income equality in Ireland in recent years.

The best measure of income equality was invented a century ago by Corrado Gini, an Italian sociologist and statistician. According to his “Gini coefficient”, a country scores 100 if all income goes to just one person. At the other extreme, if everyone has an equal slice of the pie the score is zero.

Yesterday’s numbers show that Ireland registered a Gini coefficient of 31.1 in 2011. This is, as it happens, identical to the figure for the EU as a whole.

As Europe is by far the most equal part of the world and as Ireland is average in Europe, this makes Ireland an unusually equal country by global standards (it is emphatically not a very unequal society, as those who ignore the evidence sometimes declare with great certainty).

To understand why this is so, one has to look at the great many factors influencing income distribution. These include a country’s level of economic development, attitudes to meritocracy, conditions in the jobs market, the tax system, the size and nature of the welfare state, family structure, migration patterns and much else besides.

As with any complex social phenomenon, disentangling the effect of each factor is impossible and no analysis can be definitive. But since the State’s statisticians began producing the current Gini coefficient series in 2004, some broad patterns are discernible.

The headline Gini figures show that in 2004-06 Irish incomes were a little less equal than the average across the EU. This is likely to be explained by the boom conditions of the time.

Those best-positioned to do well in a fast-growing economy – entrepreneurs whose incomes are closely linked to their businesses’ profits, shareholders who earn dividends (closely linked to big-company profitability) and those for whom bonuses make up a large part of their salaries – tend to enjoy faster earnings growth than those on fixed incomes, such as the salaried and pensioners.

But just as high earners do best in a boom, they tend to experience bigger falls in their incomes during a crash. This is exactly what happened when the economy headed south. For three consecutive years from 2007, Irish incomes became more equal as the depression took its toll, and by 2009 they had become a little more equal than the EU average.

There were specific reasons why many previously high earners were hit disproportionately hard by the slump. As lots of small and medium-sized companies went to the wall, the numbers working for themselves fell by even more than the numbers of waged employees. The self-employed who remained in business experienced a severe squeeze on profits, and therefore their incomes, as spending in the economy fell sharply. And those who owned shares in the indigenous financial institutions no longer earned dividends as the banks imploded.

Another factor in narrowing inequality over the 2007-09 period was the manner in which austerity was introduced. Analysis by the Economic and Social Research Institute shows that those on higher incomes lost out more due to budget measures than those on the lowest incomes.

That was mostly the result of higher taxes. Also important was the social welfare system. While some benefits have been reduced, both the current Government and its predecessor prioritised the protection of welfare payments for the least well off. As yesterday’s figures show, social transfers accounted for 27 per cent of disposable income, well above the share in 2008. By any measure the welfare system has done a great deal to cushion the effects of the crash.

Given the progressive nature of the budgetary adjustment and the stabilisation of the economy in 2010, yesterday’s new figures showing a rise in inequality in 2010 came as something of a surprise, even if there was a renewed narrowing in 2011. Deeper analysis of these most recent trends will be provided when statisticians publish more detailed figures on those years in the coming months.

While the effects of austerity on income equality have been much discussed in recent times, two factors – equality of opportunity and family structure – have received relatively little attention in the debate over a longer period.

Equality of income is influenced by equality of opportunity. Although Ireland’s classlessness may be exaggerated, it is a broadly meritocratic society and this must partly explain its good comparative international ranking. People at the top in business, the public sector and politics come from all walks of life, access to education at all levels is free and large numbers of foreign workers have climbed the career ladder here with less opposition than in any other country one cares to think about.

The meritocratic nature of Irish society (combined with high levels of educational attainment) gives reason to hope that the sort of structural increase in inequality experienced in some other countries will not happen here.

By contrast, a factor that may be an underlying cause of widening inequality is family structure. Ireland has by far the highest proportion of single-parent households in the 27 countries in the EU.

One in 10 of all households was in the category in 2010, according to Eurostat. Across the continent on average only one in 23 households is composed of one adult with dependent children.

There may be a polarisation emerging between the traditional couple family structure, which is increasingly double income, and the growing number of single people raising families alone. If this is the case, the effects on inequality may be felt long after memories of the property crash have faded.

1 Long Covid in children: New data is cause for concern, scientists say