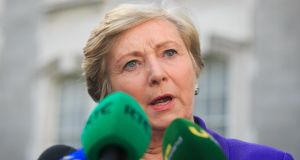 ‘Minister for Justice Frances Fitzgerald made the point that has become central in the debate so far, that: “The issue is one of equality, Marriage Equality. It is about removing the barriers which deny some couples the chance of marrying and of having relationships that are constitutionally protected”.’ Photograph: Gareth Chaney Collins

The Irish Constitution, and the Irish people whom the Constitution serves, are both seriously threatened by the Government through uncertainty in the wording of the new Article to be inserted under the Marriage Equality Bill. This would become the definitive textual source and reference point for a new right to marry.

The proposal is so seriously flawed that the passage of the new Article into the Constitution by popular mandate of the electorate should be withheld. The Oireachtas should insist that the flaws in this amendment are repaired before a same-sex marriage proposal it put to the people. This is not only my personal opinion but is the legal opinion of senior counsel and distinguished academic lawyers who will be making their research findings public in due course.

The proposed wording, in Irish and English (the Irish taking precedence in law) is as follows:

“Marriage may be contracted in accordance with law by two persons without distinction as to their sex.”

The first part of the sentence makes two persons the joint subject of the right to marry. This is at odds with the concept of a collective right of two persons. Constitutional rights are tied to the status of human person or citizen, thus: “All citizens shall, as human persons, be held equal before the law.” The new Article is not to be inserted in Article 40 (Personal Rights) but in Article 41 (The Family) thus creating a new collective right of a couple to marry.

The second part of the sentence excludes any distinction in law based on the sex of the couple. In its ordinary meaning, sex is an attribute of an individual person, not of a couple. The words “their sex” imply that the two persons are of the same sex. The sex of one person can only be male or female, although the sex of two persons – insofar as that concept is meaningful – could be male, female or male and female.

The ambiguity stands out in the authoritative Irish text. In Irish, cibé acu is fir nó mná iad means quite clearly whether they are men or women. The explicit statement of two possibilities, and not three, excludes the interpretation that the expression “their sex” includes three possibilities, viz. male, female or male and female. The words “without distinction as to their sex” (in Irish, cibé acu is fir nó mná iad) compare male with female, but not same-sex with opposite sex. To make this latter distinction, the wording might have been “without distinction as to the identity or difference of their sex”, or some equivalent. The Irish text could have been “cibé acu is fear agus bean nó fir nó mná iad. The text as published in the Bill omits the crucial distinction and thereby either (a) makes marriage available to couples who are men or women, ie same-sex couples, but not to couples comprising a man and a woman or (b) enacts a tautology and makes no change at all in existing marriage law.

Taken together these words will constitute the 34th Amendment to the Constitution. This sub-article, if inserted, would be the only provision in the Constitution regarding who may marry and, if ratified by the people, would remove normal marriage from the Constitution and leave in it two forms of marriage only, both homosexual. It would replace, not add to, the previous understanding of the term marriage, because it would imply a new definition of that term and of the constitutional right to marry.

This grave error is of momentous consequence. The Irish text of the amendment differs in serious respects from the English text and in law the Irish text, throughout our Constitution, is the authoritative one so far as judicial interpretation goes, and prevails.

It was the Government’s intention in this Bill, according to a press statement issued by the Department of Justice on January 21st of this year, “to make marriage available to same-sex couples and to opposite sex couples”. The location and structure of the provision – apparently based on a putative right to marry of two persons – is designed to put the focus on the claim for equality (the Referendum Bill is entitled “Marriage Equality”). Thus deliberately, the focus is on the category of couples rather than on the underlying change to the definition of marriage.

The Minister for Justice and Equality, Frances Fitzgerald, in her statement on that day, said, “If the wording is approved by the people, the establishment of the right of two persons to marry without distinction as to their sex implies a corresponding obligation and requirement on the State to respect and vindicate that right in its legislation.”

And the Minister made the point that has become central in the debate so far, that: “The issue is one of equality, Marriage Equality. It is about removing the barriers which deny some couples the chance of marrying and of having relationships that are constitutionally protected.” This shift of focus is a sleight of hand. A couple, in this context, is defined by reference to the institution of marriage. Unless marriage itself is redefined, a relevant couple must be of opposite sex. To claim an equal right to marry for a same-sex couple is to beg the question of what it means to marry.

The Minister, in her own words, says that the phrase “without distinction as to their sex” . . . is intended to make marriage available to same-sex couples and to opposite sex couples, so that being a same-sex couple would not be an impediment to marriage.” But the wording does not conform to the Government’s stated intention nor the Minister’s.

The Explanatory Memorandum for the constitutional referendum that is proposed, states that “The purpose of the . . . Marriage Equality Bill . . . is to amend the Constitution so as to provide that persons may marry without distinction as to their sex.” This right is already there. No one is prevented by the Constitution from marrying on account of his or her sex. Were this the case it would defeat the point of marriage. There are only two sexes. Both are catered for. The real question at issue is not “who may marry?” – evidently, every unimpeded adult may marry – but “with whom may a person contract a marriage?” The fundamental problem with the proposed wording is that the amendment addresses the first question, but not the second.

What the Minister has achieved, in the actual legislation proposed, is the elimination of normal marriage and the creation of two same-sex marriage types, the gay and the lesbian. If the Constitution is to say that couples have a right to marry then the three types of relevant couples need to be explicitly covered and provided for – namely, gay couples, lesbian couples and heterosexual couples.

In the light of the above it is surely incumbent on the Oireachtas to remedy the defects in the Government’s proposed wording. If the Oireachtas fails to do this, the ambiguous wording will itself become the central issue of the same-sex marriage referendum.

It seems, in my judgment, that the rationale behind the Government’s choice of the existing form of words is so that it can publicise the constitutional amendment as introducing an equality arrangement between couples rather than having to style it as a redefinition of marriage, which is what the amendment really is. Equally, in my judgment, it is not an achievement of equality.

For the Minister, it is back to the drawing board in a serious way. It is surely clear, from the above analysis, that we should have had a Green Paper, or a White Paper, opening debate and then resolving it, with accuracy and with balanced judgment. Once again – as has happened so many times in the past – we have fumbled the ball and are running into a scrum that will then have to be the subject of political disengagement way into the future. It is hard to forgive such a mess being made of a fundamental part of our lives.

Bruce Arnold is a journalist and writer

1 ‘It was pitch black’ - Rescued teenager describes night afloat with her cousin in Galway Bay
2 Coronavirus: Number of outbreaks in Irish homes rising for five straight weeks
3 Nine tenants evicted from north Dublin property by men in masks and dark clothing
4 Conor Pope’s staycation diary: ‘It’s like I’m staring at a Polaroid of my childhood holidays’
5 Britain fails yet again to take Ireland into account
Real news has value SUBSCRIBE