Una Mullally: Why laughing at the far-right is dangerous 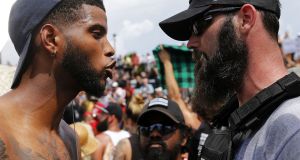 When is it better to laugh at Nazis, and when is it better to punch them? When white supremacist Richard Spencer was punched in the face after Donald Trump’s inauguration in Washington, DC, earlier this year, such strange ethics were debated.

In the aftermath of the violence in Charlottesville, Virginia, one story from Germany emerged as a potential tactic.

1 US passengers fly into Dublin: ‘I’m here for six days. I guess I’ll have to stay inside’
2 Covid-19: Restrictions on travelling abroad may last several years, expert warns
3 Keith Duggan: Bubba Wallace tweet shows just how troubled Donald Trump’s mind is
4 50 best Irish albums of all time – in order
5 Stunning image of comet Neowise captured over Dublin Bay
6 Back with our old friends at eir – and nothing seems to have changed
7 Dublin has crowd-free weekend as pubs long for July 20th restart
8 If tourists are such pariahs should we not be testing them on arrival?
9 Forget bulging muscles; strength is all about nerves
10 Maureen Dowd: Biden has his limitations but he’s no Trump
11 Gardaí given guidance on new face mask regulations hours before they become law
12 Anne Enright: ‘Nuala O’Faolain was an impossible person, to whom we owe so much’
13 Jack Charlton’s own grievances endeared him to Irish fans
14 Thandie Newton names names. Will Hollywood punish her?
15 Coronavirus: No new deaths reported but 17 more cases confirmed
16 Off the charts: why this paint colour is Instagram's favourite
17 Paschal Donohoe’s victory seen as a revolt against EU’s ‘big four’
18 TV View: Proper Irish wake for Big Jack, the man who gave the nation notions
19 My marriage is boring and polite. How do I make my husband interested in me?
20 Football club raffles house in Donegal to raise funds
21 ‘My rent here is so low it’s a joke’
22 Taoiseach urges British people not to holiday in Ireland at present
23 Coronavirus: Who gets a vaccine first? US considers contentious question of race
24 GAA club in north Cork confirms positive Covid-19 case
25 Dave Hannigan: Notre Dame’s Fighting Irish leprechaun needs its ass kicked
26 TV Guide: 23 of the best shows to watch this week
27 Andy Moran on moving on from a Mayo career that glowed golden to the end
28 A whole bowl of Creole – and don’t skimp on the shrimp
29 David McWilliams: The Pandession is destroying Ireland’s Craic Economy
30 Polish election goes to wire as exit poll gives Duda tiny lead
31 This Connemara coastal home will blow you away
32 Luke Kelly sculpture at North Wall vandalised for seventh time
33 Cluster of Covid-19 infections at Kerry ‘house party’ investigated
34 Theatre was broken before Covid – now there’s no going back
35 Delicious details of Mary Trump’s book open up world of president’s family
36 Our new restaurant critic’s first review
37 Paschal Donohoe on The Economics of Belonging: Crisp analysis of discontent
38 Monster or machine? Everything we know about coronavirus after six months
39 Maria Steen: ‘Progressive’ views permeate daily life
40 Bobby Storey: The IRA's planner and enforcer who stayed in the shadows
Real news has value SUBSCRIBE