Una Mullally: Web Summit was an ego boost for Dublin 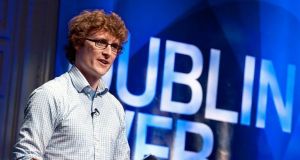 So long to the Web Summit, which is leaving Dublin for Lisbon in 2016. The face of the Web Summit, Paddy Cosgrave, is everything Irish people pretend to commend but actually resent. With his Trinity accent, bouncy hair, and tech bro vibes, Cosgrave, his compatriots might whisper, has “notions”.

But he has also walked the walk. In an industry renowned for spoofing, he and his team actually made things happen. They brought the biggest names in tech to Dublin, grew the conference from a few hundred attendees to thousands, and expanded to Las Vegas and Hong Kong, and soon to India. Cosgrave and co are not interested in small fry or dodgy wifi, and they’re not going to apologise for it either.

And why should they? While Irish people are generally alarmed by bolshiness, the tech “sphere” isn’t the place for caution or modesty. It fetishises risk-taking and alarming expansionism. Scale, scale, scale.

National insecurity, which permeates business and tourism here, means we crave affirmation. We wanted the Web Summit’s setting to also be the sell, even though it didn’t really have anything to do with the Web Summit’s success. As the Summit came around every year, you’d hear more guff about what it meant for the event to be in Dublin, and how Dublin was a key component to its success, don’t the billionaires just love a good pub crawl, and how there’s something about the city that makes the Web Summit sing.

It’s the type of thing tourism boards love to propagate, politicians love to repeat, and commuters like to hear on Morning Ireland so they can go off to work feeling good about where they live. Aren’t we great. But the reality is, the Web Summit never connected to the city and the city never connected to it. Ticket prices were high, most of the attendees were visitors, free fringe events (one of which I co-produced last year) were sparse, and the efforts to create a nightlife aspect to it was fractured and half-hearted.

The ambition of the Web Summit was frequently compared to Austin’s South By Southwest. But at SXSW, you spend your time hopping from venue to venue around Austin getting a real feel for the city. The media coverage was disproportionate, but look, there were all these shiny internet people coming to our town! They like us! They really like us! This is after all, the country that literally rolled out a red carpet for international facepalm Donald Trump.

What the summit offered Dublin, was an ego boost for the city, a sense of optimism, and a misplaced projection about the wider tapestry of tech in the capital – the European HQs of multi-billion-dollar tech companies that base themselves here to pay less tax, the “vibrant startup scene”, and how the summit made Dublin a destination meeting place for hawking apps and rock star entrepreneurs.

This all fed into a loose narrative that Dublin was legit in the tech world. There’s plenty of talk about “Dublin’s vibrant start-up scene”, but right now every single city in the world says the same thing. Berlin is mad about it’s vibrant startup scene, as is Reykjavik and Madrid. “Vibrant” too, I imagine, are the startup scenes in Amsterdam, Copenhagen and Riga. Startup scenes fall over themselves with vibrancy.

In terms of what the Web Summit was worth to the city, the €100 million figure batted around seems to have no basis in reality. Fáilte Ireland estimates that the event was worth €37.5 million to the city (around the same the National Ploughing Championships is worth to the local economy), and said that two years ago it brought in €24 million. What it’s aura is worth, is almost impossible to quantify.

If Fáilte Ireland, IDA Ireland, and Enterprise Ireland hadn’t been supporting the Web Summit, I’m sure an even louder chorus of people would be criticising them for not doing so.

Looking around the RDS a couple of years ago as everyone clamoured to discover what the hottest startup in the building was, the answer was pretty obvious: it was the Web Summit itself. And like all Irish successes, it’s now going elsewhere to grow. The city of Lisbon is putting €1.3 million on the table to assist the event. “Notions” are a very Irish thing. So too is grudging respect. So fair play to them. Now, what can fill the gap it leaves?