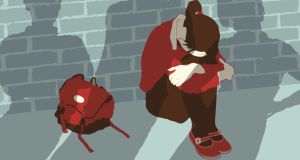 A study published in 2014 of GSAs in Canadian schools showed heterosexual boys in schools with GSAs were half as likely to attempt suicide. Photogrpah: Getty Images

What do we do about bullies and bullying? The 2019 School Climate Survey survey published last week and conducted by BeLonG To Youth Services and Columbia University was the largest ever research sample taken of LGBTI+ young people (788) in Irish schools on this matter.

Responses to the survey included allegations of sexual abuse in PE changing rooms, slurs being scribbled on photos around the school and on lockers, a suicidal trans student feeling like a “one-man zoo”, and a queer girl being repeatedly punched and kicked. Anti-bullying procedures exist, but it’s clear from this survey that their implementation can be patchy.

Bullying is rooted in a lack of empathy for the self, and the projection of ones trauma, fears, insecurities, confusion, and self-loathing on to someone else

Around the country, LGBTI+ youth services have reported a dramatic increase in young people needing to access their services since marriage equality was passed in 2015. One of the positive impacts of that referendum is of course the broader social change in attitudes towards LGBTI+ people in Ireland it has enabled.

But, as the discourse broadens, so too does the need for resources, capacity building and funding for organisations and initiatives nationally. That referendum, as well as the increased awareness of the needs of young people who are transgender, non-binary or questioning their gender, broke a dam of sorts, but that also needs to be matched with the sponge to soak up what flows from that.

Bullying is rooted in a lack of empathy for the self, and the projection of ones trauma, fears, insecurities, confusion, and self-loathing on to someone else perceived as vulnerable, other or targeted for difference. We know that school bullies have often encountered bullying and abuse themselves at home, or earlier in their lives in various settings, and that they then perpetuate this cycle, like all cycles of abuse. Bullying behaviour has a context, it does not emerge randomly out of the ether. Bullying is not just a disease, it is also a symptom.

But it’s not just the bullied person who needs to be helped or consoled or counselled, it’s those who are bullying. If these bullying tendencies are not countered and dealt with early on, those same people will grow into adults who continue to bully in the workplace, at home and on the street. We are constantly searching for ways to help victims of bullying, but we need a holistic approach that tackles the environment in which bullying occurs, and the sentiments that drive it.

This brings us to the Gender and Sexuality Alliance (GSA) model which research suggests diminishes bullying across the board, not just against LGBTI+ young people. Having begun as gay-straight alliances in Massachusetts in the late 1980s, GSAs have evolved into a broader model often called gender-sexuality alliances. These student-led groups allow for the inclusion of young people who don’t identify as LGBTQ+ yet want to take an active role as allies. Such alliances exist in some schools in Ireland, but a more standardised approach across the board would undoubtedly benefit everyone. In March, Cork Institute of Technology’s LGBT+ Society launched Ireland’s first instructional handbook on establishing GSAs in secondary schools.

We must centre young people in the planning, policymaking and implementation of changes

There is a lot of evidence about how GSAs make school environments better. In fact, GSAs often have knock-on effects far beyond the wellbeing of LGBTQ+ students. A study published in 2014 of GSAs in Canadian schools, for example, showed that heterosexual boys in schools with GSAs were half as likely to attempt suicide, while gay and bisexual boys had 70 per cent lower odds of suicidal thoughts. Multiple studies have documented the positive impact of GSAs, from GSAs being linked with positive school climates generally, to youth in schools with GSAs reporting lower smoking rates and alcohol and drug use.

During the consultation process of the National LGBTI+ Youth Strategy 2018-2020, of which I was the independent chairperson, young people called for the introduction of mandatory LGBTI+ inclusive education, the implementation of anti-bullying policies, school policies on gender-neutral uniforms and gender-neutral toilets, supports such as the GSA model, student-staff networks, and counselling, inclusion of gender theory and LGBTI+ history within the school curriculum, LGBTI+ diversity training for all professionals in schools, the removal of religious patronage in schools, and rethinking single-sex schools as an education model. These things were not just thought up by NGOs or LGBTI+ rights organisations, they were called for by young people themselves, rooted in their own experiences in school.

We know that young people can lead individually and collectively on issues that adults often fail to grasp. In recent times, we have seen how teenagers have led the global protest movement on the climate emergency, and also resistance to gun violence in the US. Young people are well ahead of adults on many issues, particularly around gender and sexuality.

While parents may be grappling with vocabulary, new conversations, experiences that were alien to their generation, and the differing and evolving perspectives of their children, we should listen to and learn from the knowledge, experiences, and ideas of young people. We must centre them not just as the people who will be impacted by changes that need to be made in Irish schools, but also in the planning, policymaking and implementation of those changes.

1 Transgender Cork farmer (65) surprised at positive response to telling her story
2 Covid-19: Travel restrictions unlikely to be lifted before July 20th
3 Hanging up my fork: My final three meals as Irish Times restaurant critic
4 Fintan O’Toole: On this Fourth of July, the American republic is in grave danger
5 Bobby Storey: The IRA's planner and enforcer who stayed in the shadows
Real news has value SUBSCRIBE