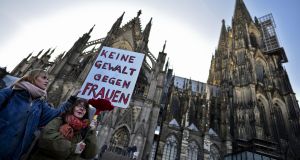 The details of what happened in Cologne on New Year’s Eve, where hundreds of men mostly from immigrant backgrounds were involved in assaulting women, are still emerging. The apparent co-ordination of group sexual assaults and muggings is bizarre and terrifying. It is a mass act of misogyny.

I can’t imagine how frustrated and ashamed fellow asylum seekers, illegal immigrants and immigrants in general in Germany must feel about this behaviour. We all hold collective shame when one of our own does something terrible in another country. It doesn’t take much to trigger racism and anti-immigrant sentiment in Europe today but, wow, talk about giving a bunch of people a bad name. With right-wing voices now suddenly interested in violence against women, perhaps we can utilise this moment to address the broader issue.

Perpetrators of sexual assault against women do have one thing in common, and it’s not religion or ethnicity, it’s gender. “It’d be great if we could take rape, sexual assault and structural misogyny as seriously every day as we do when migrants and Muslims are involved as perpetrators,” Laurie Penny wrote in the New Statesman.

Are there cultural differences that colour both good behaviour and bad behaviour? Yes, of course. But it’s not necessarily a case of “some do that and others do this”. It’s more: many do the same thing, but do it differently. Street harassments and assaults happen everywhere. How they unfold can have local quirks, but the upshot is the same.

By travelling, women become aware of the cultural differences in street harassment. We end up making broad generalisations about the idiosyncrasies of harassment from place to place: guys in this place are sleazier than in that place, you’ll get more hassle in that country than the other country, that city is more dangerous for women than this city. Women share experiences and anecdotes because personal safety is something at the forefront of our minds. This layer of negotiating places is often invisible to men, because potential male perpetrators act very differently when men are around.

When women talk about these experiences, they are frequently shouted down by some men who refuse to try and see the world from a woman’s perspective. “You’re blaming all men!” some say, as a way of shutting down the conversation. Of course women aren’t blaming all men. I am, however, blaming all men who assault women. There’s a massive difference.

When I was out for a jog the other week down Dublin’s Grand Canal at 5pm, a bunch of young lads whizzed past me on bikes. One smacked me hard on the ass. Did he do that because he grew up in Ireland? No. Did he do that because of what religion he was? No. He did it because among some men – especially in a group dynamic of their peers during those volatile teenage years – there is a profound sense of entitlement and desire to assert power over women, a subconscious need to intimidate, and a misplaced sense that subjecting women to assault is point-scoring among pals. It is about dominance. It is about reminding us that we are in danger. It makes women fear some men. There is a warped sense of a game about the whole thing, but that game is one of hunting.

Almost certainly not. Men are often victims of unprovoked violence (mostly by other men), but it is rarer for that violence to be sexual. By taking an uppity stance that assaulting women is something “the other” does, we are ignoring both a global and local experience.

We disown violence against women as something “the other” does at our peril.

1 Six weeks of Level 5: Non-essential shops to close, no visitors to homes and a 5km travel limit
2 Life under Level 5: What will the next six weeks look like for the State?
3 Much of what we think about Covid-19 is wrong. We need to change the conversation
4 Covid-19: State moves to Level 5 for six weeks with hopes of ‘meaningful’ Christmas celebrations
5 Don’t panic-buy! Don’t panic-buy! How to spend your last hours before lockdown
Real news has value SUBSCRIBE