Una Mullally: #Clueless politicians at a loss over dialogue online 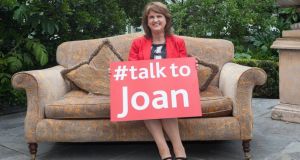 Large swathes of the internet may be controlled by billion-dollar companies, but it is still a democratic tool. So why can’t Irish political parties make it suit the workings of democracy and day-to-day politics?

Labour’s latest foray into something internet-y is #TalkToJoan. The point of the campaign is to let people ask Tánaiste Joan Burton questions on Twitter “during a live Twitter chat”, which will be held in July.

Obviously, the idea of launching a hashtag that isn’t going to kick off until July is silly. And, obviously, the hashtag became an instant forum for criticising Labour and its policies. You could see it coming a mile away. Why, every time an Irish political party engages with the internet in this way, does it automatically end up as the digital equivalent of dad-dancing?

Let’s look at a hashtag that did well recently. The theme of the National Women’s Council of Ireland’s annual general meeting last week was “Feminist Futures”. Online, the hashtag #FeministFutures gave people an opportunity to discuss what kind of gender- equal future they envisaged. Maybe a feminist future would involve equal pay, or not being shouted at in the street, or better childcare.

Once the hashtag took hold, loads of people weighed in. It wasn’t just a conversation, but a live compilation of genuine aspirations and discussion points around the purpose of the AGM’s theme. It was thought-provoking and interesting.

While I’m sure the council was happy to see it gain traction and hoped that would happen, it wasn’t just about getting loads of tweets, but about the issues being discussed. In order to do this, it had to be something pertinent to the audience, and also something the the council was willing to let others take hold of and own for themselves.

This is perhaps the central problem faced by political parties when “doing” the internet. They are scared of ceding control of an idea or conversation to the masses.

Companies, brands and campaigns have gone from using digital technology to tell people about something they are doing, to allowing everyone to be part of a dialogue. An online campaign’s success is now often judged for the extent others took ownership of it.

Politicians aren’t used to giving up that control. Staying away from dialogue is a conservative reaction, because engaging in dialogue opens you up to the riskier parts of communicating.

The idea of talking directly to Joan Burton isn’t a bad one, but focusing on one channel online, Twitter, is faddish. While Facebook was also mentioned, hashtags of that nature remain a Twitter preoccupation.

Politicians have always listened to people, but certain people more than others. And the old-school communication post of a clinic can never come near the volume of respondents online. Hashtags are short-term. Listening to the electorate in multiple ways across multiple channels and platforms online and off is not.

All of the tools and channels exist for political parties to explain their policies to the people, yet they are rarely used. Instead, the type of online communication we get from political parties is stuck in the old spin and PR mode.

Let’s say a political party launches a policy document. What you’ll probably get in their online communication about this is maybe a little video about the launch of the document, a kind of PR video that isn’t too different from a hotel website showing you its facilities, with the manager saying a few words to camera. What you don’t get is an explanation about policy.

The internet requires brevity, so maybe it’s not a good idea to strip policy documents down to 140 characters or a snappy hashtag (although #allaboutjobs accompanies most government job announcements quite effectively). But why don’t the parties use the internet to actually inform people about the substance of what they’re doing, as opposed to the gloss of a launch?

If Irish political parties want to use the internet with any success, they have to move away from migrating the same old PR ideas online. They have to actually engage in a more conversationalist way, allowing the online electorate to access information about policy and initiatives and ideas, and then listen to what comes out of that.

As the marriage referendum showed, people engage with issues online. The internet won’t change general apathy or cynicism, but it does give people an opportunity to engage.

That is, of course, if Irish political parties actually want an informed electorate. Or maybe that’s a democratic #steptoofar. Twitter: @UnaMullally

1 Israel faces ‘greatest crisis’ as it loses control of coronavirus spread
2 Warning of serious brain disorders in people with mild coronavirus symptoms
3 Airborne coronavirus: What you should do now to help yourself stay safe
4 Storey funeral highlights fundamental problems with Sinn Féin
5 How fraudsters used lockdown to lure Irish victims into boats and caravans scam
Real news has value SUBSCRIBE