Miriam Lord: Extra spice to festivities in area ‘involved in a mix of politics and the arts’ 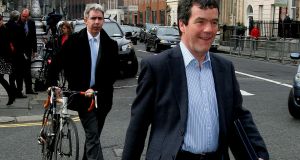 Noel Dempsey, chairman of the Temple Bar Company: Celebrating a “milestone in the story of Temple Bar”.

Dublin’s Temple Bar Company is marking the 25th anniversary of the area’s redevelopment next month with a festival of arts and politics.

The political side of the celebrations will have added spice if Taoiseach Enda Kenny decides on a November election – the festival is running over the weekend of November 19th-21st.

Such a scenario would bring back some unpleasant memories for Noel Dempsey, chairman of the Temple Bar Company. The former Fianna Fáil minister didn’t contest the last election, which saw the party’s vote collapse after a shambolic retreat from power by a government in tatters.

Speakers will include the usual suspects – sorry, a host of deep political thinkers and speakers such as Micheál Martin, Lucinda Creighton, Mary O’Rourke, Catherine Murphy and Eamon Ryan.

We have studied the publicity literature and – thank God! – there is a role for the political anoraks’ anorak, Noel Whelan. He’s chairing a debate on November 21st in the Temple Bar Studio and Gallery snappily titled: “The tyranny of the whip and party politics is ended and good riddance.”

We don’t know if the organisers have a contingency plan in the event of a general election, when the politicians and pundits may be required elsewhere for permutation and prognostication duty.

Perhaps Dempsey could assign the vacant slots to himself, remembering what Brian Cowen did in those chaotic final days when he had to assign multiple portfolios to his remaining few ministers who hadn’t resigned.

“The area has always been involved in a mix of politics and the arts. Some will say there has been too much of one and far too little of the other. This event will celebrate both.”

There will be “pop-up debates” over the weekend in various pubs and restaurants, because it wouldn’t be Temple Bar without a pop-up something.

Other topics up for discussion include “The future of the city – managing change and transformation” with added Frank MacDonald; and “Gender quotas: a lazy way to a more representative democracy or an absolute necessity to change our political culture?”

And there’ll be queues around the block to get into “Stop banging your head against a brick wall – politicians just don’t care about culture – cultural policy is never going to be either a keystone of any government manifesto or a significant vote-winner – an Irish perspective.”

Details can be found on the Temple Bar Company’s Facebook page.

1 We need to pay very close attention to what is happening in Britain now
2 Normal People Class of 2020: The nine college friends in the series
3 Gabriel Scally warns against ‘rush’ to relax Covid-19 restrictions
4 Simple restorative exercises that can improve your posture after all the sitting
5 Connell losing touch with club championship is real tragedy of Normal People
Real news has value SUBSCRIBE