The Pope may think smacking is okay, but we know it's harmful

Three out of five adults support a ban on slapping, research has found 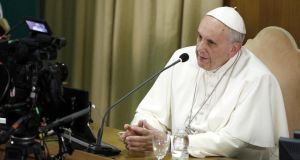 He hasn’t banned smacking in Catholic schools, so presumably any priest working in one is acting out of “dignity” when hitting children.

Being hit actually helps a child to “grow and mature”, the Vatican press office explained. “Who has not disciplined their child or been disciplined by parents when we are growing up?” A spokesman added. So as the “Holy Father”, should he be smacking us about rather than allowing us to bow and kiss his ring?

Lots of parents haven’t hit their kids, and lots of us have grown up in a mature fashion without being smacked. Actually, most Irish parents think smacking is wrong, even though the State hasn’t made it illegal (other than in schools).

Research by the Irish Society for the Protection of Cruelty to Children and the Children’s Rights Alliance has found that three out of five adults support a ban on slapping. Three out of four parents see slapping, smacking and paddling as an ineffective disciplinary tool. Of the two in five adults who admitted to hitting their children, just 1 per cent said they did it often.

“We know that slapping children is harmful, it is ineffective and has innumerable negative effects such as increased aggression in children, increased anti-social behaviour and damage to the parent-child relationship,” states the ISPCC.

Once smacking is approved by the pope, how else may a child’s body be invaded, humiliated and physically hurt? In the same week as Pope Francis promised co-operation on clerical sex abuse, he has stated that physically harming children is fine with him. There’s an obvious disconnect. Children’s bodies are violated or not, there are no stages of incremental violation.

In 39 countries around the world, it is illegal for a parent, teacher, or anyone else to hit a child. In Ireland, corporal punishment is banned in schools, but not elsewhere. With a long history of “the leather”, and the collective trauma of children’s bodies being fair game for those with church authority, you’d have thought that Ireland would have banned corporal punishment by now.

Corporal punishment is “endemic” in Catholic schools around the world, according to the UN Committee on the rights of the child, but the pope has refused to ban it because he says he has no jurisdiction outside the Vatican.

The UN treaty on the rights of the child specifically bars corporal punishment. Under “protection rights” it aims to “ensure children are safeguarded against all forms of abuse, neglect and exploitation”. Ireland’s refusal to ban physical punishment is a main reason why we’re not signatories to the UN treaty. Parents and caregivers acting in loco parentis can still use physical force in disciplining children, protected by the common law defence of “reasonable chastisement”. Most recently in February 2013, a collective complaint was brought by the Association for the Protection of All Children (APPROACH) Ltd to the European Committee of Social Rights stating that Ireland “has taken no effective action to remedy its violation of Article 17 by prohibiting all corporal punishment and other cruel or degrading forms of punishment of children”.

So, as a society we don’t seem to have a problem with what the pope said: that slapping is good for your kids.

1 Shops, hairdressers and hotels expected to reopen next week as Level 5 restrictions are eased
2 UCC academics concerned at deepening links with Minzu University
3 Fiona Reddan: Who’s afraid of Revolut? Not AIB and BOI it seems
4 Gordon D'Arcy: I know what Joe and Cheika would do. Fix the basics
5 Almost 15% of Irish adults have been raped, study finds
Real news has value SUBSCRIBE