The Local Property Tax is being slowly choked to death 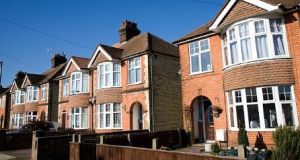 “The problem is clear. Residential property values are much higher now than when the tax was introduced.” File photograph: Getty Images

The Local Property Tax dates from mid-2013. In terms of yield and compliance it has been a success, generating revenue of almost €500 million per annum and achieving compliance rates of 96-97 per cent.

However, the tax can only be regarded as a provisional success. It has yet to pass an important test, namely adaptability in the face of strongly rising house prices. This test has already been side-stepped once, in 2016, when the first scheduled revaluation of residential property was postponed until 2019. As the new revaluation date approaches, options as to how such a politically hazardous process might be handled are receiving urgent attention. The outcome of the review of the tax, announced in January – the second review in three years – will be revealed soon.

By the time the revaluation falls due, liability will have been fixed for six years despite continuously rising property values

The problem is clear. Residential property values are much higher now than when the tax was introduced. The latest CSO data indicate that average prices nationwide in July this year were 80 per cent above their level in May 2013, the date the valuations determining current liability relate to. Revalued accordingly, liability for the tax would rise sharply, all other things being equal.

Average liability would increase by about 80 per cent. However, there would be a very wide dispersion around the average. Significant numbers of properties in the €0-€100,000 band (which, surprisingly, accounts for 27 per cent of all properties registered in 2013), would face no increase in liability. In contrast, properties valued at more than €600,000 in 2013 (just 1.4 per cent of the total) would typically face well above average increases in liability because they would now be valued in the €1 million-plus range where the marginal rate of tax is 0.25 per cent (the standard rate is 0.18 per cent). For example, a house valued at €925,000 in 2013 and now valued at €1.665 million would attract a prospective liability of €3,463, an increase of 108 per cent.

One of the objections to revaluation is that it would be unfair to Dublin property-owners. But how unfair? Here we need to distinguish between between the effect of differential price increases and the effect of differences in initial price levels. Regarding the former, there’s not much of an issue: between May 2013 and July 2018 average prices in Dublin rose 81 per cent, only marginally faster than the 77 per cent recorded in the rest of the country. There was a much more marked differential at an earlier stage of the house price cycle, but areas outside the capital have since caught up.

As far as differences in levels are concerned, it is true that the more expensive properties tend to be located in Dublin and the cheapest in isolated rural areas. Thus the properties facing the biggest percentage increases in liability are concentrated in Dublin and those facing no increase are concentrated deep in rural Ireland. But there is a simple way of correcting for this: raise the threshold at which the 0.25 per cent rate kicks in. To correct completely would require raising it by 80 per cent, to €1.8 million.

This would ameliorate the Dublin bias, but the challenge of reconciling the great majority of taxpayers to a very substantial increase in their liability would remain. An obvious argument here is this: by the time the revaluation falls due, liability will have been fixed for six years despite continuously rising property values in the intervening period. If revaluation had taken place on an annual basis, liability for the tax would also have been rising continuously. The fact that taxpayers are now faced with a sharp increase in liability is a reflection of how much less they have been paying since the inception of the tax than they would have paid under a continuously updated valuation system.

It’s unlikely that any politician will make this argument. The Government in particular seems determined to ensure that any increases in liability will be small. Hence, in launching the latest review of the tax, Minister for Finance Paschal Donohoe said it would be “informed by the principle of achieving relative stability in the tax payments of those liable to the tax”. This sounds like a recipe for maintaining the yield from the tax at or around its present level of €470 million, implying a gradual decline in the relative importance of the tax. The share of total tax receipts accounted for by the property tax has already fallen, from 1.2 per cent to 0.9 per cent. Continuing this trend would inevitably culminate in the tax dying of neglect.

This would be a tremendous pity. Instead of presiding over a declining share of the total tax take, the Government should consider adopting a strategy whereby the share of property tax in the total is increased significantly, and where the additional receipts from local property tax are used to reduce other taxes critical to the maintenance of our competitiveness.

I’m not suggesting that this be done overnight, but it could be adopted as a medium-term strategy to be achieved over, say, a five- to seven-year time frame. A small, and perhaps temporary reduction in the local property tax rates, designed to partially offset the effect of the sharp increase in property prices on liability, would not be inconsistent with such a strategy.

A report by Jim O’Leary, How (Not) To Do Public Policy: Water Charges and Local Property Tax, published by the Whitaker Institute at NUI-Galway in September, can be downloaded at whitakerinstitute.ie

1 Parents jailed over female genital mutilation of daughter
2 No obvious signs of injury on remains of McGinley children
3 ‘Wonderful boys’: McGinley children will be greatly missed, school says
4 Why our love for Leo is withering on the vine
5 The notorious Donald John Trump goes on trial
Real news has value SUBSCRIBE