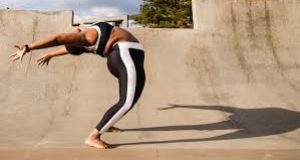 It now feels normal to follow a class given by a yoga instructor at home in North Carolina, with her dog by her side. Picture: jessamynstanley.com

Adidas’s launch of its new Formotion range of women’s exercise clothing this week was accompanied by a video of Jessamyn Stanley, the US yoga teacher and advocate for body positivity who became famous on Instagram. “Life is wild right now, it’s crazy. I can only imagine what you are dealing with at this exact moment,” Stanley exclaimed.

It now feels normal to follow a class given by a yoga instructor at home in North Carolina, with her dog by her side. The global reach of teachers including Stanley and Adriene Mishler, who has 9.5m subscribers to her Yoga with Adriene YouTube channel - and a supporting hound - has been stretched by the pandemic.

Lockdown has been tougher on the thousands of instructors who rely on classes at studios and fitness centres, many of which have been closed. Some of the UK’s estimated 10,000 yoga teachers, who often earn between £10 and £20 an hour, have formed a union to press for better pay.

This is a long way from yoga’s origins as an ancient Asian philosophy, in which asana postures formed part of a practice of meditation and enlightenment. That is what happens when remote working and social media help to turn devotion into self-improvement.

“A meditative and spiritual practice with the ultimate aims of self-diminution, ego transcendence and union with the divine was transformed into a certifiable, priceable and user-friendly product?.?.?. promising a positive body image, fitness and stress relief,” says a new Cambridge university study of yoga’s post-1970s evolution.

Amen to that, companies such as Adidas and Lululemon, the Canadian athleisure brand whose sales rose by 22 per cent in the third quarter of 2020, would retort. Had yoga not evolved so much from the Hinduism brought to the US in 1893 by the leader Swami Vivekananda, there would be nothing in it for them.

Nor would there be much to draw the casual exerciser. My 15 minutes of morning yoga, recorded at the YMCA in Greater Wichita, Kansas, is free, accessible and simple. Stretching and deep breathing are good for one, even when stripped down and demystified on video.

But yoga has come to resemble sports and entertainment, with a few stars able to create a brand and secure a global following, while a long tail of aspirants competes for a living. The guru and his ashram have been superseded by the influencer and her platform.

It has followed other complex disciplines and craft products that were taken up and adapted by US entrepreneurs to attract more customers. Howard Schultz originally modelled Starbucks cafés on Italian espresso bars but they are now distant relations.

The Cambridge study examined 40 years of issues of Yoga Journal, the US magazine, which started in 1975 by portraying yoga as a spiritual and anti-materialist philosophy. One Indian yoga guru explained that “using it for physical practice is no good, of no use - just a lot of sweating, pushing and heavy breathing for nothing”.

An early stream of anti-capitalist articles in Yoga Journal dwindled to zero, replaced by covers about how to gain “strong, toned abs”. It coincided with rising interest in exercise - Lululemon went public in 2007 with a range of “yoga-inspired apparel” straddling the line between fitness and mindfulness.

Yoga was popularised by instructors such as Bikram Choudhury, who tried to claim copyright over his 26-pose sequence of hot yoga, and was later disgraced by claims of sexual harassment. Its crucial innovation, drawn more from Tupperware than Starbucks, was to multiply the number of teachers who could lead classes locally, rather than relying on a few imported gurus.

Hence, the “certified instructor” - keen followers could not only take classes but be trained as leaders themselves. Strala, the popular New York yoga studio founded by Tara Stiles, the former model and author of Slim Calm Sexy Yoga, is now offering a 200-hour online training course in “yoga leadership” in April for $2,190.

Yoga’s expansion required, as the study puts it, “a constant supply of certified instructors who visibly embodied the characteristics that practitioners required”. It needed fewer veteran gurus and more young women leading sessions such as “Yoga for a Perky Butt, with Ashton August”.

These courses have now minted a lot of yoga teachers, only a few of whom have the charisma, looks and luck to transfer their classes online and build an audience as their studios have shut. The pandemic and the rise of online platforms have exposed yoga’s oversupply of casual labour.

It is hard to command digital attention, so the premium on being compelling is greater: the breakout yoga stars of YouTube and Instagram are women who exude personality and charm. While these gurus of social media attract an ever-wider audience, others have lost visibility.

In its early days in the US, the Cambridge study notes, “the yoga movement clearly opposed capitalist relations of production and consumerism”. But yoga’s consumers have spoken.

1 How supermarkets trick us into buying unhealthy food, and what we can do about it