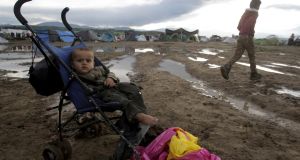 A baby at a makeshift camp for migrants and refugees at the Greek-Macedonian border. Hanging the country out to dry and expelling it from the euro area as it grapples with Europe’s biggest refugee crisis since the Second World War is not an option. REUTERS/Alexandros Avramidis

As thousands of migrants remain trapped in Greece the country finds itself at the coalface of Europe’s refugee crisis. It is hoping last month’s refugee deal between the European Union and Turkey will reduce the numbers arriving on its shores.

But another problem may be brewing for the embattled country. The Greek financial crisis, which flared up so ferociously last year, culminating in a third bailout for the country, is threatening to resurface.

Nine months after EU leaders signed off on a package worth €86 billion for Greece, progress has been slow.

The first review under the bailout was due to be completed last October. As May approaches it remains unfinished. Negotiations between the Greek government and its international creditors (which now include the European stability Mechanism, in addition to the troika of the European Commission, European Central Bank and International Monetary Fund) have been taking place periodically in Athens. Division have centred on the scale of the cuts the Greek government needs to implement – pension reform, changes to income-tax thresholds – as well as what to do with non-performing loans in the banking sector and the status of a new privatisation fund.

It all seems worryingly familiar.

There is an added complexity to discussion this time around. Internal divisions have beset the quartet of lenders, with the IMF clashing with Greece’s European lenders about the scale of the cuts needed for Greece and the politically explosive issue of debt relief. The Washington DC-based fund has said debt relief for Greece is a prerequisite for its involvement in the third Greek bailout. Euro- zone countries, including Germany, which would need to get backing from its parliament, are less keen.

Both sides have clung to figures they claim back up their analysis. While the EU lenders, led by the commission, argue that Greece has committed to enough measures to reach a primary surplus of 3.5 per cent in 2018, the IMF believes the agreed measures will lead to only a 1.5 per cent surplus.

At a key eurogroup meeting on Friday in Amsterdam the creditors struck a compromise: Greece would be asked to come up with an extra “contingency package” of measures to be triggered only if the country failed to meet a 3.5 per cent primary surplus target.

With negotiators in Athens reportedly close to agreement on the original package, the hope is that these extra contingency measures can be signed off by the Greek government in the coming days, with a meeting of finance ministers scheduled to take place next week.

But the path is strewn with pitfalls. In trying to bridge their own differences, creditors are in danger of neglecting the political realities in Greece. It is difficult to see how Greek p

rime minister Alexis Tsipras can ask his government to approve an extra tranche of contingency measures in addition to the measures already agreed.

The institutions have already warned that the contingency package must not be a “promise” but have to be legislated for. As Greece approaches its seventh year in a bailout programme, securing political support for further measures, even if they may never be triggered, may be a step too far.

The political situation in Greece is also delicate. With a majority of just three in parliament, Tsipras is under pressure to keep his government together. Recent polls also show a surge in support for the opposition centre-right New Democracy, which has been boosted under its new leader, Kyriakos Mitsotakis.

Nonetheless, there are incentives for Tsipras to agree. The Greek leader is likely to tie any commitment to the contingency package to a commitment on debt relief. While German finance minister Wolfgang Schäuble this week again queried whether debt relief was needed – opponents of further debt relief argue that debt sustainability analyses show Greece’s debt profile is no more onerous than those of countries such as Italy or Portugal – some form of compromise is likely.

One possibility being considered, according to euro-zone officials, is a commitment to debt relief as early as this week, though the implementation of the measures would be staggered over time.

As summer approaches, the prospect of a rerun of last year’s Greek drama is looming large on everyone’s minds. With Greece facing more than €10 billion in debt repayments in June and July, the country could default if a deal is not reached.

But the context has changed since last year. Firstly, the migration crisis has imbued the Greek bailout discussions with a new dimension. There is a genuine recognition– particularly from Germany – that Greece is struggling with the refugee crisis alone. Hanging the country out to dry and expelling it from the euro area as it grapples with Europe’s biggest refugee crisis since the s

econd World War is not an option.

The other external factor is the British referendum on EU membership on June 23rd. Europe’s leaders are desperate to avoid the kind of acrimonious negotiations witnessed last year as Britons go to the polls.

One senior eurozone official involved in the negotiations said this week that Greece had been told that a breakthrough was needed before the end of May. “The door shuts at the end of May and reopens on June 24th,” he said.

Europe’s twin challenges of the refugee crisis and the Brexit referendum may strengthen Greece’s hand as it enters a crucial stage in its bailout negotiations.

What is clear is that all parties will be working to avoid the kind of bitter brinkmanship that the world witnessed last summer. As Finnish finance minister Alex Stubb put it as he arrived to last week’s eurogroup meeting “no one wants to head towards a hot Greek summer again”.

1 Helen McEntee holds up well for someone with barely a leg to stand on
2 Saoirse Ronan and Daniel Day-Lewis on ‘greatest 21st-century actors’ list
3 Admission of mistake in Oxford vaccine dose raises doubts over reliability
4 Michael J Fox: ‘In the wheelchair, I’m luggage. No one listens to luggage’
5 The Crown’s Josh O’Connor: ‘I’m a republican. I’m not interested in the royal family’
Real news has value SUBSCRIBE