Despite Brexit, opinion in the North on the issue has not changed and will not change 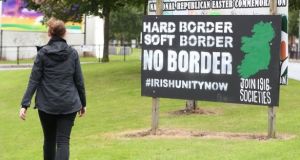 ‘Many view the aspiration to Irish unity as legitimate, but it can also be seen as political harassment.’

Almost every week another article appears on Irish unity as writers sense that Brexit has made unity more attainable. Many view the aspiration to Irish unity as entirely legitimate, but it can just as easily be seen as political harassment.

If I was to ask a woman to begin a relationship and then refuse to take no for an answer, week after week, year after year, it would of course count as harassment. Article after article on Irish unity, when the answer is always the same, should be seen in the same light.

The 2016 Life and Times Survey, taken after the Brexit referendum, showed a four to one majority in Northern Ireland for staying in the UK, including a two to one majority among Catholics. What is it about “no” that is so difficult for opinion in the Republic to understand?

Sometimes it is hard to know whether to laugh or cry. One suggestion, apparently without irony, is that the UK may wish to pay the Republic €10 billion a year to fund Northern Ireland within a unified Ireland.

It ignores the fact that UK voters have recently taken the drastic step of voting to leave the EU, in large part to save exactly this sum of money flowing to Brussels.

Why a UK government would overturn the wishes of 80 per cent of Northern Ireland’s people – and offer a huge semi-permanent, non-repayable mortgage, just because someone has a dream – is anyone’s guess.

The Belfast Agreement states that Northern Ireland’s position within the UK is “the settled will” of the people of Northern Ireland. If that changes then, any UK government would run a Border poll, but opinion has not changed and shows no signs of doing so.

Neither does the Belfast Agreement say anything about guaranteeing the right of citizens to a European identity, as claimed by the Taoiseach last week.

In fact, the few mentions of the EU in the Belfast Agreement are mostly factual acknowledgments of the EU’s existence, other than those that reference the North-South Ministerial Council’s responsibilities over EU funds.

The context of EU membership is acknowledged in the paragraph from the agreement which asserts the wish to “develop still further the unique relationship between their peoples and the close co-operation between their countries as friendly neighbours and as partners in the European Union”.

This reference to the EU states the reality at the time but is not in any sense a legally binding commitment for either the UK or the Republic of Ireland to remain in the EU.

Brexit has greatly disturbed the hornet’s nest which always lies just below the surface of Irish civility on the Border issue.

The fact that 56 per cent of Northern Ireland voters supported Remain in the Brexit referendum provided a platform to argue that Northern Ireland was thereby implicitly voting for Irish unity.

Sinn Féin’s gains in the last Assembly elections temporarily appeared to support this view. Subsequent events have shown that this was far from the case. Support in Northern Ireland for remaining within the UK remains solid, and support for the pro-Brexit DUP strengthened in the 2017 general election.

Strident opposition in some British papers to Theresa May’s deal with the DUP also appears to have rebounded, as moderate unionists closed ranks with the DUP. Many individual parts of the UK supported Remain.

My own city of Cambridge voted three to one in favour of Remain, but the great majority of voters throughout the UK, and even in Scotland, have accepted the democratic result of what was a national, and not a local, referendum.

The UK government’s Brexit paper on the Border sets out a position which envisages the lightest possible frontier. Of course, this will be greatly helped if a free trade agreement is in place between the UK and the EU.

Strangely, the Irish Government has said little in public about the need for a free trade agreement.

This is despite the obvious importance of free trade in protecting Irish food exports from potentially punishing tariffs on top of the adverse exchange rate movements since the Brexit referendum.

The Irish Government has been attempting to ride multiple horses. Being good Europeans and preventing even minor impediments to future Irish unity have trumped the pressing interests of Irish farmers and food processors.

Noises about imperilling the peace process rarely come with any detail, no names are ever named and even Gerry Adams has not suggested the Troubles will be revived.

A harsh wind blowing from Dublin just makes northern unionists huddle more tightly together around the DUP. Better instead to do what was promised in the Belfast Agreement and continue to build the best of good neighbourly relations.

Dr Graham Gudgin is a research associate at the University of Cambridge and chief economic adviser to Policy Exchange. He was special adviser to the first minister in Northern Ireland from 1998-2002.