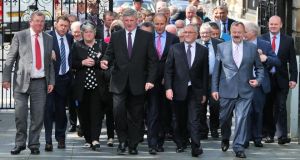 Instead of being allowed to bask in the glow of referendum and byelection victories, Micheál Martin has been immediately brought down to earth by the sudden departure of a prominent Senator. But in the long run it could actually do him a power of good.

At a similar stage in the run-up to the last election Enda Kenny was faced with a leadership heave, but the decisive manner in which he saw it off showed that he had what it took to be Taoiseach.

Senator Averil Power’s resignation from Fianna Fáil did not remotely amount to a challenge of similar proportions for Martin, but it did prompt a strong and immediate response from a leader who is often accused of indecision.

More to the point, it rallied his party around him, and the mutterings about his leadership which have persisted for a long time have now dried up and are unlikely to surface again this side of the election.

So instead of weakening Martin, Power’s defection has strengthened his hand within the party at a critical time in the run-in to the election.

The bizarre aspect of Power’s departure is that Martin demonstrated considerable courage in taking the Yes side in the referendum campaign when it would have been far easier to fudge the issue and adopt a covert No attitude.

Back in the 1980s, Fianna Fáil under Charles Haughey adopted a cynical approach to the first divorce referendum and helped defeat it for narrow party political advantage.

Martin deserves credit for not treating the same-sex marriage referendum in the same way despite the fact that a number of his TDs would have been more comfortable taking the No side in the campaign.

It is true that a number of Fianna Fáil TDs did not campaign for a Yes vote, but the same applies in all of the Dáil parties.

Fianna Fáil, like Fine Gael, is a broadly-based party with conservative and liberal wings ,so expecting everybody to share the same view on an issue like same-sex marriage was never realistic.

As for the Carlow-Kilkenny byelection, Martin showed a hard-headed grasp of political realities in the selection of Bobby Aylward as the candidate most capable of winning the seat.

The absence of women in the parliamentary party is certainly a problem, but, after six byelection losses, winning the seat in Carlow-Kilkenny was an absolute priority.

It is easy to dismiss the Fianna Fáil parliamentary party as “male, stale and beyond the Pale” but Martin has to play the cards he was dealt with by the electorate and hope to get an infusion of new blood, and particularly women TDs, when the election comes around.

At that stage many people doubted if the party had any kind of future, and Martin’s challenge was to hold the battered remnants together for the long road back to political credibility and ultimately to power.

One of his big dilemmas was how to combine the traditional role of opposition leader in harrying the Government while that same Government was implementing the thrust of the economic recovery plan devised while Fianna Fáil was in power.

Martin has appeared more comfortable attacking the Coalition for austerity than claiming credit for the policies that led to the recovery. The tactics did pay off in a good local election performance in 2014 when Fianna Fáil won 25 per cent of the vote to become the biggest party in local government.

The party has failed to build on that result, and has slipped back since then, regularly trailing in the opinion polls behind Sinn Féin. However, the Carlow-Kilkenny byelection, like the local elections, showed that when it comes to elections Fianna Fáil is capable of outpolling Sinn Féin.

Martin has shown determination and courage in the way he has taken on Sinn Féin, particularly over the Maíria Cahill case, when some people in his party would have preferred to shy away from it. Instead he was unrelenting in his criticisms of Sinn Féin, and he should continue that approach by refusing to be drawn into some pan-nationalist front in response to the latest political deadlock in the North.

While a recent Irish Times poll put Sinn Féin ahead in the top-line figures by 21 per cent to 20 per cent the detail showed that among those who say they always vote in referendums Fianna Fáil was on 22 per cent and Sinn Féin on 19 per cent. The Carlow-Kilkenny result suggests that the same trend will manifest itself in people who vote in elections. For instance, Fianna Fáil was further ahead in the byelection than constituency polls had suggested.

Repeating that performance in as many constituencies as possible is the challenge facing the party in the coming months.

1 Restarting Ireland: When and how will we ‘get back to normal’?
2 Tuberculosis vaccine ‘potential game-changer’ in Covid-19 fight
3 Mary Lou McDonald: This crisis shows that Sinn Féin was right
4 Coronavirus: Another 17 deaths and 331 new cases reported
5 Dublin deserted: Coronavirus turns city into ghost town
Real news has value SUBSCRIBE