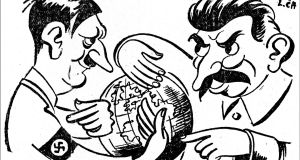 Most of our partners in the European Union succumbed to strong men of the right or the dictatorship of the proletariat at some stage over the past century. Photograph: Roger Viollet/Getty Images.

The drama surrounding the counting of votes today in 40 constituencies around the State is a testament to the endurance of Irish democracy for almost a century.

For all its faults and failings, the Irish Republic is about as far from a “failed state”, the clichéd jibe bandied about during the financial crisis, as it is possible to be.

In fact we are one of the oldest continuous democracies on the globe and that has not come about by accident. Our much-maligned political class have had something to do with it, as has the good sense of succeeding generations of voters.

All of the candidates who stood for election yesterday deserve our gratitude, whether they represented unpopular causes and received a handful of votes, or romped to victory with a quota on the first count.

Without the willingness of 550 or so highly motivated people to put themselves forward for the 158 seats in the Dáil, our democracy would wither and die. This morning all of them are in the same boat humbly awaiting the verdict of the ballot box. The people’s decision is final and nobody questions it.

It is no harm to remember that this is not the case in many places in the world today. For that matter, most of our partners in the European Union succumbed to strongmen of the right or the dictatorship of the proletariat at some stage over the past century.

Those who get elected to the 32nd Dáil in the next day or two will be entitled to congratulate themselves on having come through a gruelling process to which most of their fellow citizens would not dream of submitting themselves.

They won’t be able to rest on their laurels for too long, though, as they will quickly be subject to representations, complaints and even whinging from the same voters over the next five years but that too is part of what makes democracy vibrant.

There were times in recent years when the complaining and negativity almost got out of hand and overwhelmed the efforts of those trying to put the country back on a sound footing.

In the end the optimists won out and recovery began, mainly due to the mature response of a majority of people to the plight the State found itself in, but it took leadership and courage from politicians of various parties to get consensus about what needed to be done.

The careers of some of those politicians came to an abrupt end at the last election and others may well join them this weekend. Politicians don’t necessarily get thanked for doing the right thing but that is how democracy works.

Today’s count will illustrate the fact that the counting of votes has become almost as vital a part of the democratic process as voting itself. That is why there was such a storm when the attempt to move to electronic voting got under way more than a decade ago.

The late Brian Farrell, who did so much as a writer and broadcaster to illuminate Irish politics, defended the current laborious system of counting as playing an essential role in the transition of one government to another.

Writing about elections more than a century ago, the politician and patriot Tom Kettle drew on the analogy of Gulliver in the land of the Lilliputians who frees himself from the intricate mesh woven around him by the little people by the simple process of stretching himself: “The national organism best repels outrage not by incessant twitchings but my long receptive accumulations of force duly discharging themselves in the end in that muscular avalanche of a yawn which is styled a general election.”

The complexities of the single transferable vote mean that it may take some time for that yawn to finish. All of the 158 seats may not be filled until Monday or Tuesday and it may take considerably longer for the clarity to emerge about the shape of the next government.

The atmosphere was quite different in 1977 when I covered my first general election count as a reporter with the Irish Press. That election produced one of the biggest landslides in Irish history, with Fianna Fáil sweeping to an emphatic victory over the Fine Gael-Labour coalition led by Liam Cosgrave.

My memory of the count for the East Galway constituency in Loughrea remains vivid. One reason is the dramatic scenes that took place when sitting Fianna Fáil TD Michael Kitt lost his seat to party running mate Mark Killilea and fighting broke out in the early hours.

It read “Put Your X for Fahy”. It had been there since the 1918 election campaign that produced the first Dáil. The pleasure the man took in pointing out the slogan from almost 60 years before represented a justified pride in the achievements of the state that emerged from that election.

In 2016, when so much is being made of the violent actions that happened in 1916, it is worth remembering what we owe to the democratic tradition that expressed itself so decisively in that election to the first Dáil.

1 How much coffee should I drink? How much is too much?
2 Gardaí investigating four-lane motorway sulky race
3 I decided that day if I start working for myself at least I'll know where I stand
4 Bloomberg attacked from all sides in heated Democratic debate
5 Two arrested in connection with murder of Keane Mulready-Woods
Real news has value SUBSCRIBE