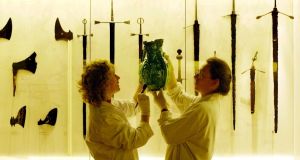 Would a more pragmatic, creative solution not be both less expensive and less destructive of the National Museum of Ireland’s capacities? Photograph: Bryan O’Brien

The National Museum of Ireland in Kildare Street, Dublin, is one of our premier cultural heritage institutions. It is the treasure house of our national archaeological collections. It is the place where we keep and exhibit the objects and materials that can be used to tell the long story of our 10,000 years on this island.

The legal, social and moral responsibilities of the National Museum of Ireland and its staff are enormous. They include the curation, management and protection of our archaeological and material culture heritage, and the communication of knowledge about this heritage to the widest possible audience, both in Ireland and to people all over the world.

Its exhibition, conference, and educational spaces are where we teach our children about our ancient past, as can be seen by the throngs of school children and students that move though them every day.

It has recently been proposed that the National Museum of Ireland will have some of these spaces taken over for use by Seanad Éireann, as the latter’s debating chamber is refurbished.

As part of our Oireachtas, Seanad Éireann is an integral part of our democracy. The Irish people voted for its retention in a referendum. It is clearly the case that Senators serve their country patriotically. There is no need to imply that their work is not valuable and important.

There is the Dáil chamber itself. With proper scheduling, could the Seanad not meet in the chamber when it is available? Are there not other large rooms in Leinster House, such as Committee Room 1, which apparently is roughly the same size as the Seanad chamber, and already has TV cameras, sound and recording equipment? Beyond, Leinster House, are there really no alternative spaces available in the city centre, or beyond?

In any case, why should our National Museum of Ireland be the solution to a lack of space in Government Buildings?

But now that we’ve started, we should ask how much space is actually to be taken from the museum? It has been widely reported that the move is into the Ceramics Room (the large space currently used by NMI for its conferences, seminars, temporary exhibitions, public outreach and educational activities).

In fact it seems that there is an intention to also take the Japanese Room to provide an entrance or atrium for Senators so that they do not have to move through the public; the Ceramics Room itself, and the Chinese Room for a new fire escape for the Senators (a room where NMI staff currently have their offices, who obviously will have to be moved to another room, thus potentially removing yet more exhibition space). In other words, the scale of the takeover is likely the entire southern, upper wing of the museum.

Now with the planned arrival of the Seanad it seems a lift is possible. But the proposed lift will provide no access to other upper floor exhibitions, on the Vikings, Egypt, Medieval Ireland. Nor will it go down to the basement of the museum where the object collections are held. Will the members of the public visiting the NMI be able to use it or is it merely for the benefit of the members of the Seanad?

There have been some comments that all this work is an “investment” in the National Museum of Ireland’s facilities, and also some reports of payments to the museum. After several years of serious budgetary cuts and ruinous financial under-investment, any such payment to the NMI can only be a fraction of what it needs, and cannot begin to replace what they’ve lost in recent years, and the staff that they have had to let go. Setting that aside, we have to keep asking, will the works actually be useful for the museum?

Does the National Museum of Ireland really need a political debating chamber, with all its bangs and whistles, or does it need actual investment appropriate for a 21st century museum located in a beautiful home, at the heart of a capital city, as can be seen in both the National Museum of Denmark, in Copenhagen, and the stunning National Archaeological Museum in Madrid?

Will the newly installed Seanad debating facilities intended for the National Museum of Ireland be removed when it leaves? If so, are these alterations then not a massive waste of public money?

While we’re on it, what is the financial cost of this proposed move of the Seanad into the National Museum of Ireland? Will it be the €1.5million, €1.7 million, or €2 million as variously reported – or will it creep upwards as the work progresses? Is this a justifiable expenditure of public money for a temporary move of the Seanad into the museum, when other cheaper options could be available?

Indeed, where are the guarantees that the Seanad will actually depart the National Museum of Ireland in two years time? Without them, any talk of a “temporary move” has to be regarded with due caution.

Finally we can ask; what will be the impact of this extremely expensive and damaging intervention on the National Museum of Ireland’s duties, responsibilities and obligations, its staff and their resources, and the public’s use of its own institution’s exhibitions, conference, and educational spaces.

It is our National Museum of Ireland after all. We should ask. Prof Aidan O’Sullivan lectures at the school of archaeology, University College Dublin.

1 Rare whale dies after getting into distress in Wicklow Harbour
2 Coronavirus claims one more life and 11 new cases reported in Republic
3 Fintan O’Toole: Future of the American republic is in grave danger unless Trump is defeated
4 Covid-19: Travel restrictions to stay and 'green list' put on hold amid fears of second wave
5 Bobby Storey: The IRA's planner and enforcer who stayed in the shadows
Real news has value SUBSCRIBE