SDLP will be the loser in merger with Fianna Fáil

Uniting these two parties would curb our potential appeal to voters 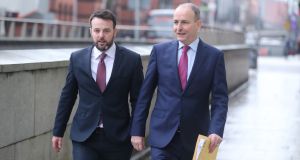 The SDLP was founded in 1970 to challenge Northern Ireland’s structural political, economic and social injustices and as well as the shibboleths of a tired Irish nationalism.

Thanks in large part to the SDLP, Northern Ireland is a different region now.

Massive problems remain, not least the existential challenges of Brexit, endemic cronyism and sustained economic decline. They are fundamental challenges but, as John Hume often said, if the problems haven’t changed, neither have the solutions.

Following behind Hume there were and still are hundreds of women and men who do the slow, patient work of building consensus on the ground and who trade not just on our heritage but on our own skills and ideas.

A refreshed SDLP has the opportunity to connect with a new generation of voters in Northern Ireland. For too long violence and sectarianism, or the justification of it, have been considered a political currency.

Corruption and self-interest have undermined governance.

In its desire to confront those issues the SDLP has sometimes taken its eyes off the organisational ball. But what the SDLP cannot be accused of is failing to work for the common good, even at political cost to itself.

We have always resisted the siren calls of glib answers, populism and polarisation. We’ve always presented a platform with a bigger picture, that pitched to everyone and not just cultural nationalists.

Our social democracy has been about achieving social cohesion and recognising community relations in Northern Ireland as more than just “separate but equal”.

This brings me to the suggestion that the SDLP should merge with Fianna Fáil. For the most part, Fianna Fáil has been an honourable partner with the SDLP in advancing the aims of democratic Ireland, along with Fine Gael and our sister social democratic party, the Labour Party.

I grasp fully our party’s problems but I respectfully disagree with the proposal.

At a time when we need to unite Northern Ireland and lead its opposition to Brexit, the crisis is instead is being presented as an opportunity to drive through this proposal.

The political conversation is undoubtedly changing in Northern Ireland but this merger would curb our potential appeal to voters, including to those who are newly alive to the prospect of a modern, agreed Ireland.

It would also end the decades-old alliance between Fianna Fáil, Fine Gael, Labour and the SDLP, an alliance that has ensured that reconciliation is never allowed to become a political football.

An exclusive merger is not a solution. For decades the SDLP never copped out of building coalition

The SDLP is and must remain the convergence and common ground of Irish politics.

It is the place where the very best of Fine Gael, Labour and Fianna Fáil have united behind our vision of a new Ireland, enabling the SDLP to harness the power of constitutional nationalism in the interests of everyone on the island.

Our duty is to embody the new Ireland, because while others may try or pretend, nobody else can or will do that in Northern elections.

We can do that by standing for diversity and the strength in it; by realising that unionism and nationalism are not identities fixed for life; by being up for persuasion and not just cordiality.

We can do that by being proudly Northern, determined to make our region a success and a positive example of conflict resolution inspired by the ideals of the European Union.

To do so we must retain impartiality and integrity as regards to southern politics, ready to work over the coming challenging decade with whichever parties are in government, in a position to unlock the energy and the talent in all parties.

The worst effects of Brexit can be stopped, Stormont can be restored and, if history tells us anything, it is that the SDLP – independent, progressive, pro-European and New Ireland to its core – is needed now more than ever.

An exclusive merger is not a solution. For decades the SDLP never copped out of building coalition, no matter how impossible and exhausting the situation may have felt.

I welcome and share the desire of our leadership to reverse our electoral decline and in the SDLP tradition I want to build and not wreck.

Those who support this merger have requested alternative approaches to be put forward, and I hope those approaches will be given the space for dialogue and debate in keeping with the SDLP’s long-held democratic culture and respect for our grassroot members.

On Saturday, at a special conference to consider the proposal, our delegates should have the opportunity to extend the proposed partnership wider into democratic Ireland, to preserve our relationships with the Party of European Socialists and to protect our internal coalition going into another tough election.

Claire Hanna is the SDLP MLA for Belfast South