Same-sex marriage not necessarily a harbinger of abortion liberalisation 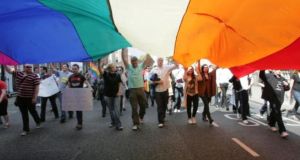 Marriage equality victory has raised expectations that abortion rights will be next.... Photograph: Cyril Byrne / The Irish Times

The resounding endorsement of same-sex marriage by Irish voters is leading many to wonder whether the cultural sea-change it reflects will accelerate a push to liberalise the abortion law. However, to equate the two issues is not justified by facts.

Data from the US, although a very different context than Ireland, indicate that abortion and same-sex marriage should be seen as quite distinct issues.

A widespread assumption is that liberals and moderates are likely equally to favour gay rights and women’s right to legal abortion and that religious conservatives are equally opposed to both. The reality is much more nuanced. While support for same-sex marriage has rapidly increased in the US (as in Ireland) over the past few years, attitudes toward abortion have maintained a highly stable pattern across the 42 years since the US Supreme Court legalised abortion (in its infamous Roe v Wade decision in 1973).

In 1996 – three years after Ireland decriminalised homosexuality – 27per cent of Americans indicated support for same-sex marriage; currently, twice as many do (55 per cent). And, reflecting this rapid attitudinal transformation, even before the US Supreme Court last month affirmed the right to same-sex marriage, it was already legal in several states.

The contrasting stability in abortion attitudes and rapid change in same-sex attitudes is encapsulated by the views of young Americans. Like their Irish peers, 18-29 year old Americans are far more likely than older cohorts to favor allowing gays and lesbians to marry legally. Over two-thirds (68 per cent) of them, compared to a half (51 per cent) of even their closest age peers, those age 30-49, favor same-sex marriage.

On abortion, notably, there is little variation by age or generation in Americans’ attitudes. This issue divergence reflects the different moral considerations at the core of these two highly-charged issues. Abortion is fundamentally of a different moral order than same-sex marriage, intensely complicated by questions surrounding the right to life.

But quite apart from the knotty moral questions abortion poses, the social context that helps fuel cultural change is mostly absent vis-à-vis abortion. We know from research that the more contact individuals have with gays and lesbians in everyday contexts, the more likely they are to develop a favorable disposition toward gays.

The increased public visibility of gays and the shift in attitudes and laws are making gayness a less-closeted identity than in the past. More people, not surprisingly, are self-identifying to family members, friends, and co-workers as gay. One result of these disclosures is a further fueling of the dynamic of attitudinal and cultural change with respect to gay people and their rights.

In short, it is easier for individuals to see the normalcy of same-sex relationships if they mix, however occasionally, with individuals who are open about their same-sex attraction.

By contrast with the increased coming-out of gays and lesbians, women’s abortion experiences remain largely unspoken. In the US, despite the high incidence of women who have had an abortion, it is not an experience that is talked about in public or typically even shared with close family and friends.

The issue of abortion, therefore, tends to remain depersonalised from the women who have had to negotiate the lived reality of an unwanted pregnancy and its moral and practical dilemmas. This, in turn, makes it difficult to develop mass media and political advocacy frames that present abortion other than as an abstract, rights issue. At an aggregate level, its depersonalisation further cordons off abortion attitudes from external forces of generational and cultural change.

The status of abortion in Ireland may well change within the next few years. Clearly, the issue has long been a matter of vigorous public debate, stretching back to the first “pro-life” amendment referendum in 1983, and it continues to arouse no small amount of political, legal, medical, and public controversy.

Moreover, with Ireland now a leader in publicly endorsing same-sex marriage, there may be a certain enthusiasm to no longer being a laggard on abortion relative to the rest of Europe (and to the US). However, my analysis of the American context, cautions against assuming that public support for gay rights is of the same piece as support for abortion. The culturally liberal zeitgeist currently palpable across much of Ireland, urban and rural, does not mean that the expansion of abortion access is an inevitable next step.

Michele Dillon PhD, is professor of sociology at the University of New Hampshire, and senior advisor for research at its Carsey School of Public Policy. Michele.dillon@unh.edu

1 Midlands lockdown: Movement restrictions in place for residents of Kildare, Laois and Offaly
2 Main points: What restrictions have been imposed on Kildare, Offaly and Laois?
3 Coronavirus in Ireland: Four more deaths and 98 new cases reported
4 ‘Draconian’: TDs from across Midlands shocked and angered over lockdown
5 Masks Q&A: Who has to wear them in shops and what happens if you don’t?
Real news has value SUBSCRIBE