Drawing distinction between refugees and migrants is hypocritical given our history 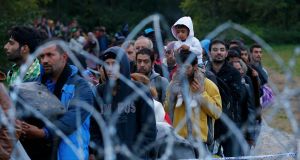 In recent weeks the waves of refugees that have broken onto the beaches of southern Europe have prompted a huge volume of media commentary. As a Christian leader, I cannot help but notice that secular language appears to be inadequate to address such events.

We see politicians and journalists reaching for biblical and theological terminology to address the profound moral and social issues involved.

At times this spiritual language is helpful, particularly when it reflects the positive side of religion in expressing compassion and stirring politicians to care for the needy. At other times, sadly, we see a darker religious vision that seeks to manipulate fear to build a fortress mentality.

When the Hungarian prime minister, Viktor Orbán, described the reception of Syrian refugees as a threat to Europe’s “Christian values”, my immediate response was that if our values cause us to slam doors in the faces of desperate refugees, then those values are neither Christian nor valuable.

Beyond the soundbite, however, it is not enough for religious leaders to merely protest when our faith is hijacked to serve a nationalist agenda. We have a responsibility to explain what our sacred texts do say about the current crisis.

There is a persistent tendency to categorise those in dire need as being either deserving or undeserving. This approach, which was the rationale behind Victorian workhouses, was first outlined in an Elizabethan Poor Law of 1563.

Today this distinction differentiates “genuine refugees”, who are fleeing persecution, from “migrants”, who are seeking better opportunities and employment. Such a distinction is pointless, hypocritical and unbiblical. Pointless because it matters not to a parent whether their child dies of hunger or by an act of violence. Any parent worthy of the name “mother” or “father” will move heaven and earth, let alone cross man-made boundaries and borders, to seek a better life for their children.

The refugee/migrant distinction is hypocritical because the defining migration event in our own history, the Great Hunger (1845-52), was an economic catastrophe rather than an ISIS-style bloodletting.

Such distinctions are also unbiblical. Jesus, both by his actions and words, demonstrated and taught that we should help those in need irrespective of whether we feel they deserve such help or not. This is what Christians call “grace” – the bestowing of undeserved blessing – and it is the very core of our gospel message.

Another thoroughly un-Christian concept is the idea that “charity begins at home” – that we are somehow obligated, at the expense of others, to primarily help those who were born within the same arbitrary national boundaries as ourselves.

The Old Testament challenged the Israelites on this very issue. They were commanded to care for the “alien and foreigner” among them. The Israelites, like many today, would be tempted to ask, “Why should we let these people into our land and share our food and resources with them?”

In a parallel to our Irish experience of migration, they were also reminded that they should show compassion to immigrants because the Israelites themselves had been strangers and foreigners in Egypt (Deuteronomy 10:19).

This non-nationalistic approach is heightened in the New Testament. According to the apostle Paul, Christians’ primary citizenship, irrespective of the geographical accident of their birthplace or the type of passport they carry, is the kingdom of heaven. Peter goes even further, describing believers as “foreigners and exiles” in the world (1 Peter 2:11).

This leaves no room for an insularity that gives our first loyalty to those of our own ethnicity or citizenship.

The patriotism that exhorts us to ignore the plight of refugees because “charity begins at home” is based on notions of man-made nationalism and racial solidarity that is fundamentally incompatible with the New Testament.

“Christian values” powerfully support policies that welcome immigrants into our society and treat them with compassion and dignity.

Nick Park is executive director of Evangelical Alliance Ireland and author of Ministry to Migrants and Asylum Seekers: A Guide for Evangelical Churches