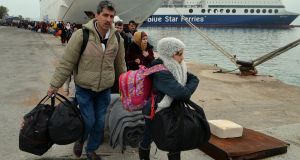 Migrants and refugees from Pakistan arrive at Lesvos, Greece. According to the UN High Commissioner for Refugees, 600,000 arrived on just one Greek island – Lesvos. Why? Because it is less than four miles from the Turkish coast. Photograph: Panagiotis Balaskas/EPA

Late last month the EU warned of a “looming humanitarian crisis” in relation to Middle East refugees entering Europe through the Greek islands. Looming? What planet are they on?

The crisis is not only here already, in our back yards, but it has been happening for a very long time. It “looms” over the European conscience, but it is a resident volatile canker in the hearts of the exiles.

Last year almost one million refugees entered the EU, most through Greece. Some 4,000 were dead on arrival.

According to the United Nations High Commissioner for Refugees, 600,000 of these arrived on just one Greek island – Lesvos. Why? Because it is less than four miles from the Turkish coast. In the past two months another 70,000 – more than eight times the same figure for January-February 2015 – ventured into Greek waters. More than 300 died.

The answer to those who have knocked on Europe’s door is, “no thanks, not today. Not in my back yard [Nimby].”

We can accept a dead child on our television screens because it isn’t real. But we couldn’t face the responsibility of one on our local beach. A state of exile is not merely physical displacement – it is an exile in the mind, in the heart, in the viscera. As Salman Rushdie wrote in his novel Shame: “It is the fate of migrants to stand naked amidst the scorn of strangers upon whom they see the rich clothing, the brocades of continuity and the eyebrows of belonging.”

These people, made of real flesh, blood and intellect, stand naked before the Kennys, Camerons, Merkels and Hollandes who are so anxious about their own continuity that they turn their backs, only to display their moral hypocrisy and fear of the Other. And that is the core of the problem: that we think of what is happening as another country, hopefully a far country, when it is within us, this Other. These naked people are our otherness.

But he or she also carries an image, imprinted on their DNA, of who and what they were, constantly running like an old film, of their identity, language and culture. These memories are both the treasure-house of meaning and the curse of displacement.

These are the kosmaki as the Greeks call the little man, the insignificant nobodies whom God, or Allah, or Jehovah, forgot or didn’t care about. Condemned to exile by the strife in their homelands – to permanent homelessness, estrangement from the only reality they know.

I look across the water to Albania, less than two miles away from my home in Corfu on Greece’s west coast. Until 1990 it was a walled garden of Maoism, and many who tried the escape route ended up dead on Corfu’s shores.

But we are cosy – the “looming” crisis of today’s refugees is on the other side of the country, so that’s alright then. Nimby.

We can turn our backs on the misery, the squalor, the inhumanity, and especially the death of children.

But less than 100 years ago the Aegean islands on Greece’s east, towards which today’s refugees are swimming, were the goal of a similar exodus – Greeks drowning as they fled the Turkish slaughter and destruction of their city of Smyrna (today Izmir) in Anatolia in 1922.

In that same Izmir today Turks are manufacturing and selling fake lifejackets that have proven to have no buoyancy. A death sentence round every neck that entrusts itself to unseaworthy boats. It is a miracle so many survive.

On a video we see the elderly islanders of Lesvos, who have been nominated for the Nobel Peace Prize for their response to this crisis. Why do 85-year-old women care for strangers from another culture, another time? Because it was also the fate of their mothers who survived the crossing in 1922. They have taken the initiative to succour the survivors and to mourn their dead. The most heart-rending statement they make is “we don’t fear them”. History here isn’t the past: it’s a reminder of the future.

The complete incapacity of aid agencies to absorb this influx of misery constitutes not merely a humanitarian crisis. It is a symptom of the breakdown of European ethics in favour of bourgeois security. Someone has replaced “responsibility” with “respectability” in the lexicon of care.

I’m not disputing the need for aid. I’m saying that it is only the tip of a gesture that can never solve the crisis because it can never address its roots.

Nor can it effect a change in the hearts and minds of bourgeois Europe.

These refugees embarrass a Greece already struggling with its own identity. But they are also the orphans of history. They are the tragedy of their homelands and the shame of Europe.

1 Restarting Ireland: When and how will we ‘get back to normal’?
2 Coronavirus: Trump warns of ‘a lot of death’ in United States next week
3 Tuberculosis vaccine ‘potential game-changer’ in Covid-19 fight
4 TV Guide: 24 of the best TV shows to watch this week
5 Mary Lou McDonald: This crisis shows that Sinn Féin was right
Real news has value SUBSCRIBE