Remain must mean remain: why we need an all-Ireland response to Brexit 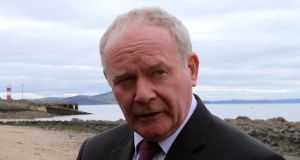 Martin McGuinness: ‘The Taoiseach needs to lead in defending our national interest in the working out of the Brexit vote. The clock is ticking.’ Photograph: Niall Carson/PA

The island of Ireland is facing the biggest constitutional crisis since partition as a result of the Brexit referendum. The negotiations in the lead-up to Easter 1998 concluded with agreement on three interdependent strands relating to: issues within the North, between the North and the Republic, and between Ireland and Britain. Like a three-legged stool, take away one leg and it collapses.

The Good Friday (or Belfast) agreement, as it became known, was endorsed by 94 per cent of the voters in the Republic and 71 per cent in the North. Bunreacht na hÉireann was amended, institutions North and S outh were established and 18 years of political progress proceeded on the basis of that democratic vote.

Brexit will undermine all-Ireland bodies and co-operation created by the peace process and it will harden partition. It will have consequences for human rights legislation which, again, is specifically referred to in the Belfast and subsequent agreements.

The agreements, the Irish economy, the views of the Irish Government and the wishes of our people have been set aside by the British government.

The current economic uncertainty is already damaging trade and investment and causing currency fluctuations which impact particularly on cross-Border business and exports. But all of that will become overshadowed if we see the imposition of tariffs and the restriction of free movement of goods, services and people on the island of Ireland.

An EU frontier, hard or soft, stretching from Dundalk to Derry, is not in our national interest. And it’s all very well for Theresa May to say she doesn’t want a return to the borders of the past. But when she was home secretary, she was absolutely clear that Brexit would inevitably lead to renewed border checks in some form.

I fear that this is exactly what will happen.

“Brexit means Brexit” is the rhetoric of the Tory Party, but nobody – not even Theresa May – has any idea of what it actually means.

It is abundantly clear from the engagements I have had with the highest levels of the Westminster government that they are scrambling in the dark. They have no demonstrable plan to plot a way through this crisis because they didn’t expect this to actually happen.

I personally warned David Cameron nine months ago that he was sleepwalking us all out of the European Union.

The British government recklessly caused this crisis for entirely self-serving reasons. It was a foolish attempt to placate Ukip racists and the loony right within the conservative party.

However, I am clear that the democratic vote in the North must be respected. Remain must mean remain.

From our perspective, what is needed now is an island-wide approach to dealing with this crisis. That is why Sinn Féin called on the Taoiseach to establish an all-Ireland forum to discuss the impact of the referendum, to develop strategies and options to ensure that the vote in the North is respected and to safeguard our national interests.

This now needs to go ahead as a matter of urgency, including all interested groups and parties. Let those who want to work together come together, and let us get on with the work at hand. No party should be afforded a veto in this process. It is too important.

The people of the North voted to remain in the EU and we have to explore all options to give effect to that mandate. The example from Scotland has shown that such a debate can be carried out in a mature, reasonable and sensible manner.

The Brexit vote should also be a wake-up call for the EU institutions.

The Tories and the British government have demonstrated yet again that they care little for the people and economy of Ireland.

An immediate and first step would be for the Taoiseach to call together all interested parties and bodies to map out the options for the future.

Our party will play a full role in working along with the Taoiseach to defend our national interests and the democratic vote in the North.

I believe people here see their future as part of an outward-looking, positive and inclusive new Ireland in a changed EU. The agenda being pursued by the Tories is contrary to all of that, and it is time we had a genuine, mature and rational debate about the challenge of Brexit.