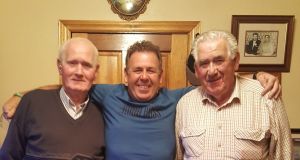 No VHF radio. No mobile phones. No blue-light convoy at the head of the quay. Donegal fishermen Michael and James Gallagher remember the relative silence as they cut their engines and secured lines ashore in Portnoo in the early hours of an August morning.

This was the summer of 1956, when satellite navigation was the stuff of military technologists and official communication at sea was by Morse code, flags and flares. As for air-sea helicopter rescue, the first such mission in Irish waters had occurred only five months previously – and not too far from Portnoo. Back in March, a Belfast-bound coaster named Greenhaven had run up on Roaninish island after its engines failed in freshening weather.

Sea conditions were too difficult for the RNLI Arranmore lifeboat to make a safe approach, but it maintained a close watch throughout a terrifying night, when all 10 crew on board the coaster survived with biscuits, whiskey, gin – and renditions of Sixteen Tons, Merle Travis’s ode to a Kentucky coal miner. The following morning, two British Royal Navy helicopters arrived from Eglinton in Derry and winched the merchant seamen aboard.

One of the two helicopters subsequently crashed after a breakfast and refuel at Narin Strand, but the crew members were unscathed. Over the following months, the rescue was the talk of the county, and the wreck of the Greenhaven attracted much tourist traffic. That particular morning in August 1956, a punt of five to six metres in length arrived into the sound as the Gallaghers were lobster fishing on their half decker, Irine.

“There were 18 on board the punt, mainly young children, none of them wearing lifejackets,”James Gallagher recalls. One young lad fired a jellyfish at them. A bit of a breeze was picking up as the punt moved off, and it took wash over the bow. A swift retreat towards the stern by the passengers swamped the outboard engine. Within seconds, all 18 were in the water.

“My uncle and cousins came aboard – all nine of us got onto one boat,”the Gallaghers recall, speaking at their home in Burtonport where they are now retired. “And we started firing ropes to pull them out ...”

Michael remembers catching a girl’s hand to haul her aboard, and thinking “this must be what a deathgrip feels like”. He reckoned she was about 17, the same age as himself. Another young girl pulled out early was beside herself, as she couldn’t see her father. She tried to jump back into the water to find him. The Gallaghers had to “work the hardest to restrain her”.

A yacht fishing for pollack about 100 yards away steamed over to help. Two young brothers still in the water swam towards the yacht’s stern. The helmsman thought the engine was in neutral, but it was still in gear. One of the young boys got caught up in the propeller.

The Gallaghers heard shouts. The yacht, now without power and with the boy’s body trapped underneath, was being blown towards shore by the wind.

“We got a rope on board and towed it to safety, and the only option was to secure the body of the wee boy,” they recall. All the while, they were trying to calm the situation, while scanning the water for any more heads.

A total of 13 were rescued by the fishermen that evening. Two adults and one child drowned – George Warren, a solicitor from Enniskillen, Co Fermanagh, Desmond McVitty, a businessman from Dublin, and Christopher Chambers, seven years old and from Belfast. Several local doctors met the Gallaghers’ fishing vessel as it landed in Portnoo. By the time they arrived back to their own home on Rutland island, it was close to dawn.

“Our mother was so relieved,”the brothers remember, as if it was yesterday. “She had heard the news radio report about an incident out at Roaninish, and she really thought it was us...”

About 15 years later, the Gallaghers were fishing up near Rathlin O’Beirne in two 65-footers when they spotted a flare. A ship had broken down earlier that day and was awaiting assistance from a tug when the wind shifted, and the master became worried. He turned down the first offer of help from them, but accepted the second after a warning, and was towed into quiet water Sheephaven Bay.

“We had a crewman on board who had been with the Royal Navy. He went on board the coaster and gave out stink to the master afterwards”.

The Gallaghers never heard any more about the Roaninish survivors, nor were they notified of the inquest into the three deaths. At home in Burtonport, James still has a photo of their half decker, at anchor close to where the rescue took place. A small boy standing on the rock close by is James’s son, Jim, now a fisherman himself.

Jim checked records and found only one brief mention of the fishermen’s role in a newspaper report. “There are not many alive now who would remember this, and they are not pushing it themselves, but I think these men should be recognised,” he says.

1 ‘When I look at the viral loads we find in elderly people, it is mind boggling’
2 Chief medical officer urges people not to visit hardware stores
3 Coronavirus: Ryanair suspends refunds and offers passengers vouchers instead
4 Impact of coronavirus ‘overwhelming’ in Republic but for public-health controls
5 Republic’s Coronavirus death toll rises by 28 as confirmed cases up by 500
Real news has value SUBSCRIBE