Power to the people: why does Ireland make community energy generation so difficult? 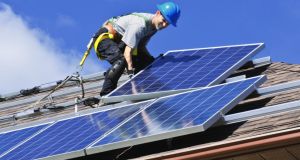 ‘Generating solar electricity on our roofs should be one of the easiest projects for a householder or a community. But in Ireland you don’t get paid for supplying solar electricity to the grid. That explains why we have only 1MW of installed solar, while the UK has 3,400 MW.’ Photograph: Getty Images

Industrial wind? Coal at Moneypoint? Fracking? Peat? The Government is consulting on the future of our energy system. They will prepare a document later this year in which the policy direction for energy will be determined.

Our relationship with energy is not straightforward. Traditionally decisions have been made for us, and until recently we happily accepted that burning fossil fuels in large plants is necessary to keep the lights on.

Lately, we are less accepting. Amid fears of disruption and adverse local impacts, communities are actively resisting developments they feel they have no control over – the Corrib gas pipeline, industrial wind for export, fracking.

It is becoming clear that imposing energy policy on people is getting us nowhere fast. There is an alternative. The vision of Friends of the Earth engages communities, local groups, and citizens to play an active role in renewable energy generation and energy savings. In this alternative vision, Ireland reduces its 90 per cent dependency on fossil fuels, reduces carbon emissions, reduces the €6.7 billion spent annually on fuel imports and develops locally appropriate renewable energy solutions from a mix of technologies. The passive consumer is replaced by the active energy citizen.

This is community energy. And we do not need to reinvent the wheel: across Europe, communities are creating projects where they own and are actively involved in running local energy resources – a wind farm, solar panels on local buildings, district heating systems, collective insulation projects – developments by the people, for the people.

The Scots are over halfway to achieving their target of having 500MW of community and loc ally owned renewable energy, the UK has just released a community energy strategy, Danish citizens own 70-80 per cent of all wind turbines and 1.5 million Germans generate electricity on their roofs.

Quite simply, when it comes to energy there are too many unnecessary barriers, that we need the Government to remove. Historically, energy in Ireland has been controlled by the few. For a community today wishing to build a wind farm, it is a gamble whether they will be able to connect to the national grid. If it happens, the connection will take at least 10 years. It is a lucrative investment if it can happen – a wind project offers about a 10 per cent return on investment. In Denmark it is mandatory that a percentage of all wind farms are owned locally. In Ireland, there is only one community-owned wind farm. In short, community wind is hard to do.

Generating solar electricity on our roofs should be one of the easiest projects for a householder or a community. But in Ireland you don’t get paid for supplying solar electricity to the grid. That explains why we have only 1MW of installed solar, while the UK has 3,400 MW.

Remarkably, we are going backwards when it comes to local and small generators. Poland just joined a growing group of progressive European countries to offer micro- generators payments for the electricity they generate. This year we removed this incentive, so now only big producers can get paid, an approach akin to only paying a handful of big farmers for their food produce, and forcing every small food producer to give away their product free.

The recent National Economic and Social Council research supports community engagement and participation in renewable energy to build social support. This year the Intergovernmental Panel on Climate Change told us that globally we need to triple renewable energy generation and leave the majority of fossil fuels in the ground. A recent Eurobarometer survey showed 89 per cent of us in Ireland agree with renewable targets. Yet for a transformation of this scale to be realised, it needs to be an endeavour that all our citizens feel ownership of.

Community energy offers the key to unlocking this transformation because the best way to feel ownership of something is to actually have ownership of it.