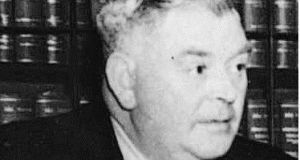 Joseph Blowick: tapped into a sense of discontent with the political establishment

Coalition governments have been the norm in Irish politics for the past 30 years but for the previous almost 70 years, they were fairly rare; in fact, there were only two in the 50 years from 1923-73.

Joseph Blowick, who died 50 years ago on August 12th, was a member of those two what were called “inter-party” rather than coalition governments and was co-founder and leader of one of the small parties in them.

He was born in Belcarra, Castlebar, Co Mayo, in March 1903, one of six children of John Blowick, a farmer, and his wife Honoria Madden.

After attending the local national school, he worked on his father’s extensive farm, later inheriting it.

In 1938, at Athenry, Co Galway, he co-founded an organisation called Clann na Talmhan (the family of the land) with Michael Donnellan, a farmer from Dunmore, Co Galway, who became patriarch of a famous Galway footballing dynasty.

The new movement attracted support from all over the west of Ireland and from southern seaboard counties and dedicated itself to promoting the interests of smaller farmers. It called for government support for land reclamation, the lowering of taxes on farming land and greater afforestation.

Part of the reason it came into being was because of discontent with the existing and dominant Irish Farmers’ Federation, which at the time was campaigning strongly for the abolition of rates on agricultural lands. Smallholders opposed this, as they felt it would mainly benefit wealthy farmers from the midlands and east.

Clann na Talmhan attracted substantial rural, small-farmer support but also got backing from some urban areas from voters disillusioned with Fianna Fáil and Fine Gael due to the rationing, shortages and restrictions caused by the second World War.

In the 1943 general election, it won 10 seats, with Blowick and Dominick Cafferkey taking two of the five seats in the Mayo South constituency.

Donnellan’s attitude to establishment figures was clear from what he said at a in Dunmore in 1942: “You could take all the TDs, all the senators, all the ministers and members of the judiciary and all the other nice fellows and dump them off Clare Island into the broad Atlantic. Still, Ireland would succeed. But without the workers and producers, the country would starve in 24 hours.”

But because most of the party’s support would have been of a more conservative bent, Donnellan ceded the leadership to Blowick in 1944. In the general election of that year, the party retained nine of the 10 seats won the previous year, with Blowick and Cafferkey repeating their success in Mayo South.

Although it dropped to seven seats in the 1948 election, those seats were crucial in the formation of the country’s first inter-party government, which brought an end to 16 consecutive years of Fianna Fáil rule.

Joseph Blowick became minister for lands in the new government and Michael Donnellan was parliamentary secretary (junior minister) to the minister for finance.

Blowick’s main achievement in office was the 1949 Land Reclamation Act, which benefited smallholders in the west and south especially. He also promoted reafforestation during his period in office.

In the latter year, he married Teresa O’Malley from Castleburke, Co Mayo. They had seven children.

The 1950s were an economically and socially devastating time and despite his achievements in office, the party he led fared badly in the 1957 election, dropping to three seats. The following year, a committee of seven replaced him as leader of the party organisation, although he continued as leader in the Dáil.

Following the 1961 election, only he and Donnellan remained as TDs and, when the latter died suddenly in 1964, his son John succeeded him but as a Fine Gael rather than a Clann na Talmhan TD. Blowick did not contest the 1965 general election and the party that he cofounded ceased to exist.

To be re-elected consistently from 1943 to 1965 was no mean achievement. More than six feet tall and weighing some 22 stone, he was, according to the Connaught Telegraph, the “first man to effectively impress the problems of the West on the national conscience”.

A devout Catholic, he was a steward at Knock shrine and a member of the Knights at Columbanus. He was also an accomplished handballer and skilled with machines.

1 Coronavirus: 188 new cases and no further deaths amid concern over eight counties
2 Dublin farmer discovers overnight rave on his land
3 Should I switch bank now with Ulster Bank at risk of closing?
4 Work to stabilise land after ‘suspected tunnelling’ behind terrace could cost €300,000
5 Gemma O’Doherty could face further charges over N11 bridge protest
Real news has value SUBSCRIBE