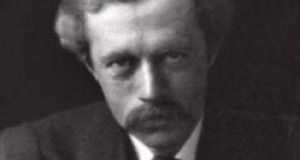 In the summer of 1896, the Welsh-born poet Arthur Symons visited the west of Ireland with his friend WB Yeats. They spent their time in Clare, Galway and Sligo, as well as the Aran Islands. Symons recorded his impressions of the islands and details from the trip for a London literary magazine.

Symons was a poet, translator and critic. In his lifetime, he edited or contributed to more than 75 books. He was educated by private tutors and moved to London at 16 years of age. He knew Yeats from the Rhymers’ Club and they had also shared rooms in the city. The Rhymers’ Club was a band of poets who met at Ye Olde Cheshire Cheese pub on Fleet Street to read poetry. Other members included Ernest Rhys, editor of the Everyman’s Library series, and Ernest Dowson.

On the morning of August 5th, 1896, Symons and three others set off in a Galway hooker from Cashla Bay in Galway for Inishmore, the largest of the three Aran Islands.

For the ease of understanding of his London readers, Symons described the hooker as “a half-decked, cutter-rigged fishing-boat of seventeen tons”.

It took them nearly four hours to reach Inishmore – just enough time for Symons and his party to read a book on the islands, study some maps and catch one mackerel. They lodged at the Atlantic Hotel, which was classed by the visiting poet as “a very primitive hotel”. It was made up of three whitewashed cottages.

However, despite the condition of his “little musty bedroom . . . with its half-made bed, its bare and unswept floor, its tiny window”, Symons admitted that he had never slept more soundly. Thankfully, the “starry water” lapping outside his window “seemed to flow softly about one in waves of delicate sleep”.

Symons’s visit to the islands came at a time before the advent of mass tourism. In his description of the trip, he rarely refers to other visitors, simply because there were none. We learn that the previous occupants of the hotel were some priests from the mainland who came on holiday with their bicycles, and before them a German philologist, who had come to learn Irish.

For the most part, Symons found the locals to be both interested in visitors yet respectful of them. He said that “they were inquisitive, but, unlike English villagers in remote places, perfectly polite, and neither resented our coming among them not jeered at us for being foreign to their fashions”.

Symons described the islanders as “a simple, dignified, self-sufficient, sturdily primitive people”. He noted their physical appearance and style of dress. Most had blue eyes with the men usually having fair hair.

In his account, we get a very real sense of the poverty of the people and their simple way of life in “the bleak greyness of this land of endless stone and endless sea”.

Almost all the men were clad in clothes woven and made on the islands, which he defined as “loose, rough, woollen things, of drab, or dark blue, or grey, sometimes charming in colour”. The women were invariably dressed in red, “the petticoat heavily woven, the crossed shawl or bodice of a thinner texture of wool”. Meeting some women on the road, Symons noted that they wore a thicker shawl and drew it closer about them, something which reminded him of the veiled women in the East.

Once or twice during his stay on Inishmore, Symons came across some “characters”. Shortly after landing, he was met by “a crazy man, bare-footed, blear-eyed” who was begging for money. On receipt of a few coins, the man went away laughing loudly to himself, repeating some words he heard the visitors say.

Later, Symons came across “a professional story-teller”, who had just spent three weeks teaching Irish to the visiting German philologist. According to Symons, the local man was “half blind and of wild appearance; a small and hairy man, all gesture, and as if set on springs, who spoke somewhat broken English in a roar”.

His guide on Inishmore was “an elderly man with long thick curls of flaxen hair and a seaman’s beard”, who recounted the history of the island and brought Symons to a fort built by Cromwell’s men, a ruined church, and the ancient ring forts of Dun Aengus and Dun Onaght.

On the middle island, Inishmaan, Symons was brought to other ring forts. While he said that he was in no haste to leave Inishmore, he was still more loth to leave Inishmaan, because he “found the people on this island even more charming”. He did not get to Inisheer as planned, due to rough seas. Instead, the group made their way to Ballyvaughan in Co Clare and from there, to Tullira Castle in Ardrahan, Co Galway, home of Yeats’s friend, the playwright Edward Martyn.