Patrick Smyth: 800 years of Magna Carta – its legacy lives on

‘The Magna Charta Hiberniae, “son of” Magna Carta, slightly amended and issued for Ireland on November 12th, 1216, is part of the retained law of the land’ 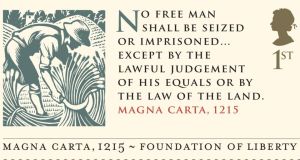 ‘I’m the commander, see,” George Bush insisted in 2003.”I don’t need to explain – I do not need to explain why I say things. That’s the interesting thing about being the president.” “L’État c’est moi!” is how Louis XIV put it.

Sometimes the mask slips. Not for the first or last time, however, Bush was spectacularly wrong. Because 800 years ago this weekend in a field at Runnymede in Surrey the obnoxious King John, after five days of fraught negotiations, conceded Magna Carta to his rebellious barons. Remarkably its 63 clauses still remain the source of four key pillars of Western jurisprudence: habeas corpus, the prohibition of torture, trial by jury, and the rule of law.

Most famously, Article 39, which declares that “no free man” shall be punished in any way, “nor will We proceed against or prosecute him, except by the lawful judgment of his peers and by the law of the land.”

It retains a central place in Irish law too – the Magna Charta Hiberniae, “son of” Magna Carta, slightly amended and issued for Ireland on November 12th, 1216, is part of the retained law of the land, mentioned as recently as in 2007’s Statute Law Revision Act. We too should be celebrating.

Even the president of the US, pace Bush, is subject to the rule of law/Magna Carta, as he was reminded by Supreme Court judge Anthony Kennedy in the 2008 decision to declare conditions in Guantánamo unconstitutional. In the landmark Boumediene v Bush, he noted: “The writ of habeas corpus became the means by which the promise of Magna Carta was fulfilled.”

On Monday Queen Elizabeth will join a “spectacular” river pageant to Runnymede to celebrate the anniversary, although no one will be churlish enough to point out the irony that royalty, and even her presence, represent the very antithesis of Magna Carta – it was the card John played precisely to save his neck by conceding that from now on royalty would have to accept the constraints of law, “the lawful judgment of his peers and . . . the law of the land”.

The charter’s restoration would be a slow burner, but inspiration in the struggles that would later develop between king and parliament and in the popular movements against privilege like the Levellers, the Diggers, and indeed the rebellion of the American colonists. Today an emasculated monarchy is all that is left, a strange flagwaver for the charter.

The revolutionary potency of the charter also resides in clauses that have tended to be forgotten with time. The concept, for example, of “no taxation without representation” could be found in Article 12 : “No scutage or aid is to be levied in our realm except by the common counsel of our realm.” (Scutage under the feudal system allowed a knight to “buy out” of military service). In 1775, Massachusetts incorporated an image of the charter into its state seal.

It is, they argue, a manifesto against privatisation that has echoes today in community fights against water privatisation, and has been cited, as Linebaugh records, in one of the communiqués from the Lancandan jungle of Central America by Subcommandante Marcos, the spokesman of the indigenous people’s revolt in 1994. “The brilliant postmodern revolt cited a tedious premodern source. Why?

“Marcos described the global forces that daily suck out 92,000 barrels of oil, leaving behind ‘ecological destruction, agricultural plunder, hyperinflation, alcoholism, prostitution, and poverty’ while the campesinos in Ocosingo have to cut wood to survive.”

“Its goal,” Chomsky writes of the Charter of the Forest, “was to protect the source of sustenance for the population, the commons, from external power – in the early days, royalty; over the years, enclosures and other forms of privatisation by predatory corporations and the state authorities who co-operate with them.”

“What art thou Freedom?” Shelley asked, recalling the spirit of Runnymede . . .

“For the labourer thou art bread,

Thou art clothes, and fire, and food

For the trampled multitude”.