Opinion: High third level drop-out rates are due to disatisfaction with courses not ability 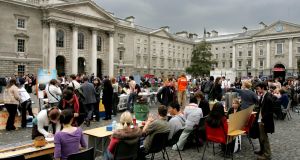 Should we be concerned about third-level retention rates as highlighted in the recent Higher Education Authority research showing one in six students dropped out in first year?

Well, we should, but perhaps not for the reasons we might think.

Higher education is reaching a pivotal point in its evolution and we need to consider again the relationship higher education institutions have with students and, more significantly, with society.

There is a parallel between the issues facing higher education now and those that faced the secondary system in 1960s Ireland.

Back then, the aspiration that secondary education should be within the reach of all citizens was a bold move met with significant concern about the ability of students to meet the academic challenges of a post-primary education.

A half-century later, secondary education is not only a right but an expectation of every citizen. More significantly, our underlying assumption is that every child is capable of completing a secondary education. The system is seen to have failed if a student does not complete second level.

This is in contrast to third level where non-completion is attributed to performance and ability rather than any shortcomings in the system.

Over the same half-century that has seen a universal structure of secondary education take hold, higher education has evolved from a very elitist system to one that is now, theoretically at least, within the grasp of everyone.

In an elitist model, entry is controlled to allow limited numbers to the exclusion of others. Remnants of an elitist model still exist in some corners of higher education, albeit through an objective and fair system of CAO points allocation.

In courses where demand outweighs the number of places, a limited number of the highest-performing students can be admitted. This allows colleges to be selective. Getting higher performing students will improve retention but how appropriate is this approach for a universal system where the aim is to open access to all?

When it comes to retention at third level, I fear we revert to elitist notions by referring to the ability of the student (whether that is their maths grade or their general points level) as an indicator of their capacity to complete a course.

By defining students as capable or not capable we undermine the great social strides that have been made in education. Is education only about the best and brightest or is it about access to higher education as a driver of social change, inclusivity and the crucible of opportunities?

If we as a society value education for its capacity to create life chances, then the focus needs to change from selecting limited numbers of entrants for elite courses to a system that deals with all manner of applicants and finds meaningful courses for their individual aptitudes.

The evidence from a number of sources, including work by the National Forum for the Enhancement of Teaching and Learning, is that satisfaction levels with chosen courses is a primary cause of student non-progression.

When dealing with student retention, institutions must value what has been achieved in the student’s time at college and direct them to more fruitful avenues.

Above all, we must not accept arguments that suggest the way to improve retention is to limit access by creating higher barriers to entry. Instead we need to place the onus on colleges to support and direct students into more suitable courses of study.

Once students find that the course they have accepted is not for them, we must have the creativeness to redirect them within the institution or between colleges.

Dr Derek O’Byrne is registrar of Waterford Institute of Technology