Many people pick up enough Irish to make do, but beyond that they are totally lost 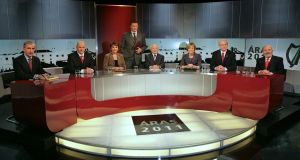 It was a big come down when in the last Presidential election only Michael D. was able to hold forth with any fluency against the other candidatesin the debate on TG4. Photo courtesy TG4 .

It seems unlikely now that the leaders of the main political parties will engage in combat in Irish on TG4 before we get that chance to cast our ballots. This is in some contrast to the last general election when Micheál Martin, Enda Kenny and Eamon Gilmore had it out together with great verve on the same station.

It may seem a minor inconvenience that we shall not have this leaders’ debate in Irish but, while the lack of any debate is partly a lack of discourse, it is also a comment on each party’s commitment to one of the two official languages of the country.

It might seem that this season’s failure is a big departure from other times. But it is unlikely that other taoisigh or abhair taoisigh would have done any better. It was a big comedown when in the last presidential election only Michael D Higgins was able to hold forth with any fluency against the other candidates in the debate on TG4.

As far as I can make out from my spies and from my memory, both Charlie Haughey and Garret FitzGerald were no more than gabblingly, flabbily fluent; Bertie Ahern hadn’t a clue (some would argue in both languages); Albert Reynolds hadn’t a country and western note; John Bruton wouldn’t have attempted a word even if he knew one; Ruairí Quinn astonishingly thought that Irish was never spoken in Dublin; and who knows anything else about anybody?

Enda Kenny was fortunate to grow up in a time when it was normal that people who attained a certain degree of education also learned Irish. I suspect that if he was much younger he would be more stuttering in the language than he is now.

He was also lucky in training to be a teacher at a time which required that some modicum of knowledge of something or other, or even anything at all, was important. On the other hand he has presided over the destruction of knowledge-based teacher education in favour of tricky-dicky methodological banality which means that no young fella like him will ever learn Irish, or anything else, as he did.

In a similar fashion Micheál Martin was lucky to attend a school in which Irish was a serious subject.

I am presuming that Joan Burton and Gerry Adams could talk a bit about their pastimes, or what they did, or didn’t do in their past times. Their Irish is commendable, but it is not good enough to go for the jugular, which is what political debate is about.

Desiring an Ireland for all (Éire do chách – oops, who said this?), one which is inclusive and broad-ranging and catholic and universal and liberal, it would be good that all party leaders spoke good Irish; good enough to engage with anyone who wished to contend with them in the language.

But if this was not possible, it would also help if they supported a public and educational policy in which more than the cúpla focal was necessary, and where thought in the language informed thought in the public sphere.

The recent dumbing-down of the language to the ritual 10 minutes of what is your name, and who is your brother, and what do you eat for breakfast as 40 per cent of the Leaving Cert will shortly be seen as a disaster.

But then we are almost quite exceptional in our steadfast monolingualism.

There are few Scandinavian or German or senior Polish politicians who could not discuss the fantasies of fiscal policy, or even the League of Ireland (if they knew anything about it) in English or in some other language if they so chose.

1 Bank leaked my loan request to family who tried to rip me off
2 Why Sinn Féin will not call the State by its name
3 A cardiac problem that could strike at any time
4 McDonald rejects idea SF public meetings ‘an affront to democracy’
5 Costa living: ‘Move home to Ireland? I’d hate it’
Real news has value SUBSCRIBE