Opinion: A minority government could be the best outcome

The government is forced to be more open to argument, evidence and debate, and parliament resumes the role it was intended for 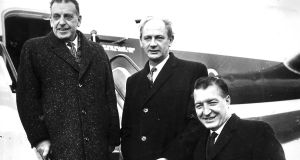 In fact minority government is quite common in Ireland and some have been stable and reforming, such as the Lemass government from 1961-65.

The election results are trickling in but the only thing clear is that it’s not clear what government will be formed. People will use the doom-laden term of Hung Dáil, but all Dáileanna since 1981 have been ‘hung’. The difference after this election is that there are few politically viable coalition options.

This will bring our memories back to 1989 when for one long, hot summer month the country waited while parties negotiated, eventually realising something that had always been thought politically impossible, a Fianna Fáil-led coalition government. Or we might think back a couple of years earlier to 1987 when Fianna Fáil fell short of a majority and Charles Haughey was elected Taoiseach on the casting vote of the Ceann Comhairle. Then Tony Gregory famously ‘went eyeball to eyeball [WITH HAUGHEY]and blinked’.

And minority government is common in the developed world. About a quarter of governments in western democracies are minority administrations. These tend to happen in certain types of countries, for certain reasons. Some countries, Ireland for instance, have investiture votes in the parliament to elect a new government. This usually means a government must secure a majority in parliament.

In other places there is no need for an investiture vote in parliament. These are often monarchies, and the Monarch or the Governor-General has a hand in the formal appointment of a prime minister. It means that minority governments can be formed, but it doesn’t mean that they can be sustained.

Minority governments aren’t quite as durable as majority ones. They don’t last as long because prime ministers call early elections to secure a majority, but the experience here and elsewhere shows that minority government isn’t necessarily unstable or ineffectual.

They have been common in Canada, New Zealand, Sweden and Denmark: none obviously basket cases for the experience. Indeed the impact of minority government may have tempered the predominance of the prime minister in Canada. Minority government has even been credited by some for bringing about the ‘Danish Miracle’ of the late 1980s and 1990s.

While we might fetishise single party majority government as stable and uniquely strong, it can also be government that is overconfident and ill-considered. Over-confidence leads to laziness and poor decision making. In Denmark it was the fact that the Social Democrats was in a minority that forced, or allowed, it to make pro-market reforms that boosted the economy and labour market.

Because a minority government cannot rely on the support of a loyal majority it tries harder when making policy. It has to be willing to compromise, becoming less arrogant and less certain of its position. It is forced to be more open to argument, evidence and debate, and parliament resumes the role it was intended for.

What we could see is the type of parliament many people have wanted. In a parliament where the government doesn’t have a secure majority the committees start to work, legislation is amended productively, and government can’t shut down debate for partisan purposes. Parliament ceases to be just an ornamental part of the policy-making process.

To work, however, it will require a government that is able to accept that it is not always right and listen to other views and make necessary compromises to get legislation passed. This may take some practice, but the humbling defeat in the general election might have helped. It also assumes that the minority government isn’t built on pacts.

If the government has side deals with a certain number of independents then it can afford to ignore the Dáíl, and nothing will have really changed. If however a minority government is formed that works on an issue-by-issue basis then it can; ministers will search around for a Dáil majority on issues by engaging with opposition parties and committees.

How might this happen here? Unlike Canada or Denmark Ireland has an investiture vote. But it only requires a simple majority of voting TDs. Just as in 1987 some abstentions, either by individuals or by a party, may make it possible for a Taoiseach to be elected. After that it will be up to the skill, guile and openness of that Taoiseach to make minority government work.

Dr. Eoin O’Malley is Director of the MSc. in Public Policy at the School of Law and Government, Dublin City University.

1 Drug dealer loses codes for €53.6m bitcoin accounts
2 Ben Affleck: ‘It took me a long time to admit I am an alcoholic’
3 Anti-Irish bigotry in Britain has not gone away
4 ‘IRA has gone away’: McDonald responds to Garda Commissioner’s comments
5 A Dad with brain cancer: I was given 18 months to live, it put things into perspective
Real news has value SUBSCRIBE