Noel Whelan: Eight points at which it went wrong for the coalition 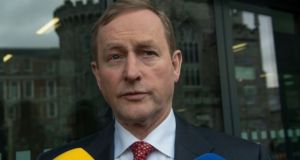 Noel Whelan: The day the election was called was pregnant with damaging scenes and sounds for the Government campaign. Photograph: Brenda Fitzsimons/The Irish Times

Last December they wanted us to believe it was about the economy, stupid, and that keeping the recovery going required keeping them in government. So pervasive was this narrative, many commented that the election was a foregone conclusion.

Mentally scrolling back now, however, one is drawn to several key points in the 2016 election at which the outgoing Government’s narrative for re-election was undermined.

These were the moments when the hubris and auction politics at the heart of its campaign were exposed, and the electorate, still hurting after the trauma of the economic and social crisis, was provoked to turn on the Government.

These key moments of Election 2016 included the following:

On Saturday, January 16th, at about 8.40pm Micheál Martin told his ardfhéis and a live television audience: “This is an arrogant and out of touch Government. They want a coronation not an election. Well this is a republic, and we don’t do coronations. The Irish people will decide.”

In the RDS hall they cheered loudly, and in many homes across the land heads nodded and people thought: “You know, he has a point.”

Two days later on Monday, January 18th, at 9.30pm, RTÉ broadcast My Homeless Family, a special one-hour documentary of footage recorded by families forced to live in overcrowded hotel rooms. Many watched in horror as young mothers, at their wits end, tried to do homework, prepare some kind of supper and settle children to sleep in a single room, knowing they would have to continue to do so for weeks and months with no end in sight.

The statistics about homelessness were dramatised as individual stories. It offended our sense of decency.

How in a country supposedly enjoying a 7.5 per cent growth rate could this be allowed to happen?

On Friday, January 29th, at about 8.20am, Prof John MacHale of the Fiscal Advisory Council told Cathal MacCoille on Morning Ireland that while wanting to win an election was understandable, it could not be done at a fiscal cost which could hurt the economy long-term. He warned that there was a danger that future flexibility in the national finances was already being auctioned off for political purposes. His remarks were aimed as a shot across the bow of all parties, but were devastating for Fine Gael who was supposed to be running on a reputation for good economic management.

At 9.30am the Taoiseach announced the election, and then rushed out of the Dáil, leaving even the acting Ceann Comhairle confused. There was then supposed to be a joint press conference with the Taoiseach and Tánaiste on the steps of Government Buildings but this became a peculiar scene, where Joan Burton waved Kenny off to the Áras while she was left to face the media.

There were further chaotic campaign scenes at a Fine Gael press conference that afternoon when, at about 4.10pm, Kenny repeatedly dodged questions about his party’s financial projections, saying he “wasn’t going to get into economic jargon that people don’t understand”. He was partially rescued by Michael Noonan.

That evening Prime Time’s political correspondent Katie Hannon reported on how Pearse Doherty was the only party finance spokesperson not to have overstated the fiscal space. Her story should have damaged all the other parties but its main impact was to leave Fine Gael’s reputation for prudence in tatters. It had achieved the remarkable feat of making Sinn Féin look the most economically-literate party.

On the following day, Thursday, February 4th, at a mid-morning event, Kenny claimed he did not know he had been invited to participate in a leader’s interview on Six One the previous evening. Faced with the implication that he was chickening out of media interviews, Kenny had to promise he would participate in all debates.

It is now clear, therefore, that Fine Gael’s campaign was fixed on a disastrous course within a week of the election being called. It would not or could not adjust course. Instead it compounded its difficulties over the last weekend.

On Sunday, February 21st, in the mid-afternoon at a large Fine Gael rally – and in front of a backdrop which still bore the “Keep the Recovery Going” mantra – Kenny screeched about the risk to the economy. When asked by the media whether he regretted complaints he had made the previous day about whingers in Castlebar, Kenny smirked and said no.

It was surreal, and the closing damaging scene to a disastrous campaign.

1 Storm Aiden prompts nationwide weather alerts for Halloween
2 US election: ‘Trump would not be caught dead here unless he wanted our votes’
3 ‘Attention-seeking’ Shane Ross has a spiky joust with Regina Doherty
4 First full moon on Halloween night since 1955 will be rare ‘blue moon’
5 The real Contagion virus is out there and it’s causing virologists to worry
Real news has value SUBSCRIBE