Alex Salmond: Nicola Sturgeon will protect her country’s post-Brexit position in the EU 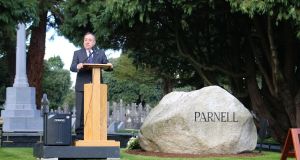 When I was a young MP and preparing to make my maiden speech in the House of Commons, I decided to climax my address with Charles Stewart Parnell’s most famous quote – the same one that graces his monument in O’Connell Street. “No man has the right to fix a boundary to the march of a nation. No man has the right to say to his country: Thus far shalt thou go and no further.”

The problem was that I was showing off, speaking with no notes whatsoever and although to the outside observer the speech went fine, I totally forgot to use the Parnell quote. I didn’t forget the quote, which is unforgettable, I just completely forgot to include it.

Speaking directly after me was Mr James Kilfidder, the then member for North Down and the sole member of the Ulster Popular Unionist Party – a completely united one man parliamentary party. As is the tradition in the House of Commons, Jim described my speech in the most glowing terms – “A young Scottish lion was loose in the Commons tonight,” he proclaimed. “The prime minister had better heed the new voice of Scotland. ”

So impressed was I by this unexpected praise that afterwards I took him for a drink and, pulling his leg, told him that I was going to use a quote from Parnell, but dropped it when I saw he was about to speak. “Ah,” said Jim. “You needn’t have worried. I was educated at University College Dublin and anyway, Parnell was a good Protestant laid low by the machinations of the Catholic Church!”

In reality, Parnell was more laid low by the British political establishment and their most practiced weapon of statecraft – divide and rule – which they have been carrying through for generations, indeed for centuries.

However, what Parnell gave Ireland was a demonstration that operating at the highest level of politics then the people of Ireland – united, organised and, above all, led – could take toward their historic claim of nationhood and do so in a constitutional manner.

Parnell’s is the peace cry of constitutional nationalism – the greatest rallying call. You can compromise in the present, indeed often you must compromise to achieve progress, but you must never compromise with the future if you are to maintain the integrity of the movement you lead.

Now of course what exactly Parnell meant by his soaring oratory at Cork in 1885, and on many other occasions, has been much debated. Interestingly, the London Times, not among Parnell’s greatest admirers (and a few years from being successfully sued by Parnell) was in little doubt at the time. They saw a threat to the security of the empire, reporting it as “a plainer hint at total separation could hardly be uttered”.

However, many historians have seen in Parnell’s words “studied ambiguity” and a “purposely imprecise” declaration suggesting that he was prepared to settle for something as limited for example as Grattan’s 18th-century parliament. The truth is that Parnell might well have accepted it, but that is an entirely different thing from settling for it.

Parnell’s words and their role as an inspiration for other lands and other movements has been extensive and unambiguous.

Pauric Travers, for example, has noted my own use of Parnell’s ringing declaration suggesting that Parnell’s “words struck a chord with independence movements elsewhere as they offer a glimpse of the promised land to those weighed down with the immediate struggle”.

Now I am in the fortunate position of being able to say exactly how Parnellism, as exemplified in the “ne plus ultra” speech, has been an inspiration to this particular, if erstwhile, national leader.

Parnell’s phraseology encapsulates the case for constitutional nationalism, or as we called it in Scotland “gradualism”. If you are to advance the cause of the country then you must take advantage of political circumstances of the moment if they offer the chance of progress. If you are to successfully lead in these circumstances then you must have the freedom to compromise, to make deals.

However, if you are to hold an independence movement united then you must never suggest that the gains of the day are the limit or the summit of ambition. Indeed you must hold to exactly the opposite of that as did Parnell in his speech in Cork.

Twice at crucial moments in my political career I have had recourse to Parnellism to maintain Scotland’s progression to statehood. The first was in 1997 when I was negotiating with then Labour secretary of state for Scotland, the late Donald Dewar, on SNP support for the devolution referendum of that year. I agreed to campaign for a proposal far short of the SNP ambition on condition that he accepted the right that the people and parliament could move on and move forward. This we agreed and the deal was done. We established a devolved parliament with an executive. Now Scotland has a much more powerful parliament with a government. The world turns and the process continues.

Fourteen years after my deal with Donald, the Scottish people and their Parliament decided to move forward by means of a referendum. Citing Parnell, I warned the then prime minister, David Cameron, that “no politician and certainly no Westminster politician will determine the future of the Scottish nation”. Under one year later, we signed the Edinburgh agreement sanctioning the 2014 referendum on independence.

In the event, Mr Cameron only delayed independence in 2014 by a last-minute promise of a further degree of devolution. A “vow” that he had refused to even place on the ballot paper in the referendum.

Now events have moved on and yet another English Tory prime minister toys with the idea of attempting to place artificial barriers on Scottish progress. The outcome will be the same. No man and indeed no woman can set a boundary on the march of an nation and no Westminster politician ever shall.

I have no doubt my successor, Nicola Sturgeon, will soon propose an initiative which discharges her mandate to protect Scotland’s position as a European nation. She will do so on the basis that if this is accepted then further gains will be made. If it is not it will make Scotland’s choices ever clearer.

Or as Parnell put it quite explicitly at the end of that address in the Cork Opera House all of these years ago: “We shall not do anything to hinder or prevent better people who may come after us from gaining better things than those for which we now contend.”

Alex Salmond MP is former leader of the Scottish National Party and former first minister of Scotland. This address – the annual Parnell Commemoration Lecture – was delivered in Glasnevin cemetery yesterday

1 Man found guilty of murdering girlfriend during drinking session
2 The real Contagion virus is out there and it’s causing virologists to worry
3 I wanted to learn more about how sex gets better with age, but my battery was running out
4 Five nursing homes receiving ‘intensive’ State support as they battle serious coronavirus outbreaks
5 First full moon on Halloween night since 1955 will be rare ‘blue moon’
Real news has value SUBSCRIBE