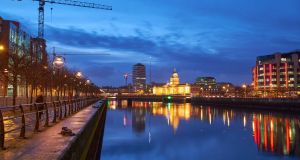 Sometimes a mental map turns out to be bigger than the terrain it describes. As you fold out that map from a lifetime’s memory, it more than covers the land it marks. Photograph: Getty Images

Lockdown drew us into a localised radial world no wider than a several-mile sweep. Various fears forced some of us to shun the day and walk instead by dark. At night, we set out to cross the suburbs, the nodding acquaintances of foxes also out from their lairs.

A mixed topography’s milestones are street corners, former quarries and petrol stations; roundabouts, crossroads and traffic lights. Under the light of the silvery moon, you traverse the concrete plains. Minds flock too easily to the concept and sheen of the word “flâneur”. I have always found this a pointless, neurotic reach for redemption in the worn formica of a French word. That flâneur f-word feels too much like a hiking club motto in the context of personalised, proprietary walks around any city: Paris’s endless 11th and 20th districts; Valencia’s intoxicated trek ending in being maced and throttled by drug dealers. After years of navigating miles of small-hour city dark, you perfect a displaced homing instinct. Neighbourhood maps get carved in your mind. There is no need for the cane of “flâneur” as you place one foot in front of the other and walk. Especially not in your own city. If you need to carry a word with you, try instead “noctambulist” and free its night-stroller semantics from “sleepwalker” as you wander around wide awake.

The dark is more revealing. It brings into focus how places have shifted and evolved, how their features and patterns have starkly changed with time. Sweet shops have turned into dental clinics; their gobstoppers and cheap toffees having worked a treat. Damaged consumers return years later to the same address for fillings, false teeth and whitening of stained fangs. Butcher shops meld into music schools; some blood-spattered apron-wearer plays Edelweiss on a meat saw with the delicate resin-shedding bow of a violin. Through spring and summer and into autumn 2020, the ghostly tune drifts nightly over to the hardware shop that’s now a child psychologist and relationship counselling clinic. Inside: the lengths of sink-stopper chain are still rattling.

Sometimes a mental map turns out to be bigger than the terrain it describes. As you fold out that map from a lifetime’s memory, it more than covers the land it marks. It could serve as a sentient carpet or a nostalgic awning for the world of people within. It’s all about memory lanes.

The distinctive perfume of a local pig farm. Fortunately, it has now disappeared. Its familiar porcine pong perhaps piped out to the periphery, this procreative patch was sold off years ago to become the breeding ground of a housing estate or block of apartments as the residential zone expanded.

The balconies of suburbia. Certain dwellings, well-appointed, furnish their occupier with the illusion of public address. Like the fascist hatch of piazza Venezia, these seem built for rousing rhetoric. Modelled on images of lazy life from 1970s holiday brochures, such balconies seem lost and useless. Where are their mild Mussolinis at this post-midnight hour? One presumes fast asleep. They delivered their speech by day and the crowd has long dispersed.

The attic conversion. Up there late every night the staccato riff of repeat Morse code emanates from a diehard radio ham. Dot dot dot/dash dash dash as an innocent telecom hobby plays havoc with the next-door neighbour’s piped TV reception. Very WWII resistance, very pre-internet. Surely it could be marketed as a retro-styled alternative to remote working. Get your message out there. Come in. Come in. Foxtrot. Yankee. Delta. Oscar. (Alice? Who the f**k is Alice?)

The shortcuts that take even longer: Clambering over walls will get you there eventually. No turning back. Broken bottles bedded in cement are crude domestic protection that predates burglar alarms and sensor-activated lights. The flower beds and nettle patches of private gardens and your old school grounds often pave the way of these late-night shortcuts. But you are probably no longer physically up to it. The streets of suburbia are linked by laneways and alleys that lurk unseen but ease the noctambulist’s trajectory.

Walk as the crow flies. An ultimate ambition of every suburbanite is to travel on foot free of the tyranny of twisting house-lined access routes called roads, parks, avenues, groves and drives; free of the restrictions of a recently fenced-in green. You have to compromise hugely as you walk around and follow prescribed general directions. But stay fixed on your magnetic north. Your wings will never be clipped.

A name written in wet cement. The spill of light from a streetlamp illuminates where you left your mark forever. Beside a cat-paw print. You used a pseudonym so posterity could not hold you to account. Now it’s years later. It’s a false name on the pavement. It is –or once was – you.

1 Sam Bennett secures Champs-Élysées win and Tour de France green
2 FinCEN Files: Dublin business features in leak of US treasury documents
3 Coronavirus: 396 more cases as public is urged to help protect ‘older and vulnerable’
4 The FinCEN files: The billion dollar a month money trail
5 The Sack of Balbriggan: The burning of a town that shocked the world 100 years ago
Real news has value SUBSCRIBE