Newton Emerson: Unionists may allow a Sinn Féin win to decapitate the DUP

Brexit was the central topic to the DUP party's annual conference in Belfast and Arlene Foster's retains strong support with the party faithful. 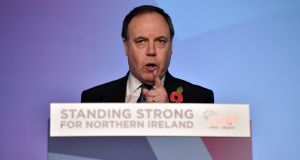 Every general election in Northern Ireland features a key constituency where the battle between unionism and nationalism is seen to be playing out. For decades these battles were about nationalism encroaching steadily on unionism – the “greening of the west”, to use Sinn Féin’s phrase.

For the past 20 years much attention has been stuck on Fermanagh and South Tyrone, where unionists held out by forming a unique electoral pact, usually involving the Democratic Unionist Party standing aside for the Ulster Unionist Party. It was presumed both parties would try this again in the next election, now set for December 12th.

Last week, new UUP leader-designate Steve Aiken ruled out any pacts with the DUP under his watch, saying the larger party had “besmirched unionism with its corruption and sleaze”.

He also vowed to move the UUP to “an unambiguously pro-Remain position”.

So the key constituency in this election will be North Belfast, where DUP deputy leader Nigel Dodds is defending a 2,000-vote majority over Sinn Féin’s John Finucane, currently serving as the city’s mayor.

This is where the DUP wants the attention of unionist voters to be focused, as its statements and campaigning have made immediately clear.

North Belfast is the only seat held by any unionist that could be lost to Sinn Féin.

However, the DUP’s focus on the constituency is equally about the battle within unionism. It allows the larger party to warn unionist voters that supporting the UUP could enable a Sinn Féin win.

The DUP can fall back on flag-waving, demanding tribal solidarity and stopping the other side getting in

Instead of having to fight an election against its own record on Brexit, the DUP can fall back on the classic tactics of flag-waving, demanding tribal solidarity and stopping the other side getting in. Any small threat Aiken’s new brand might have posed can also be strangled at birth.

There are at least three other seats the DUP could lose in December, to the SDLP, Alliance and UUP, which neatly illustrates the party’s campaigning priorities.

Yet North Belfast is the only seat where that applies and even there it is a stretch to accuse the UUP of splitting the vote.

The UUP informally stood aside in North Belfast for the past two general elections, in 2017 and 2015, more because it was defunct than as a favour to the DUP.

Dodds did not need this help to hold the seat and could probably still hold it with a UUP challenger, all other things being equal.

The real story in North Belfast, as elsewhere in Northern Ireland, has been the rise of Alliance. It is running Nuala McAllister, Finucane’s predecessor as mayor, who should build on growing support from people of all backgrounds. The DUP does not know how to appeal to such people. If it warns them they could let Sinn Féin in, they are likely to respond “so what?” To them, Finucane is no worse than Dodds.

By running in North Belfast, the UUP would be offering unionists the chance to decapitate the DUP team

The question is whether a small but significant number of unionist voters might be persuaded to feel the same way. Dodds is the DUP’s Westminster leader, its driving force on Brexit and the crucial defender of Foster’s leadership. At the DUP’s annual conference last weekend, it was plain he has had no change of heart. By running in North Belfast, the UUP would be offering unionists the chance to decapitate the apparently irreformable DUP team that many feel has brought disaster on the union, unionism and devolution, all for the price of letting one more abstentionist Sinn Féin MP stand outside Westminster twiddling his thumbs.

It would be audacious for Aiken to make this offer explicit but it is obviously implicit.

Asking unionists to risk a Sinn Féin victory is a major ask. Nobody relishes an advance for their constitutional opponents, however rational the strategic benefits.

The republican narrative of inevitably greening Northern Ireland one constituency at a time is unnerving and triumphalist; the “siege mentality” unionists are criticised for is understandable. If Finucane takes the seat, the assumption will be that it is lost to unionism forever. Calls for a Border poll are ramped up with every Sinn Féin gain.

But the republican party is not the bogeyman it was at the last general election. Its vote has declined north and south, it could lose Derry’s Foyle constituency to the SDLP and it is widely seen as a useless spectator on every issue, including a Border poll, which increasingly feels like its only, vacuous policy.

So which is the more alarming prospect for pro-Remain unionists, comprising perhaps 40 per cent of all regular unionist voters? Sinn Féin gaining a seat or the DUP returning to Westminster without learning a thing?

It looks like the UUP is going to force that question in North Belfast and the DUP is going to campaign on it across Northern Ireland.

The answer will go some way to deciding unionism’s fate.

1 Coronavirus: 25 people die in the State as new Garda powers come into force
2 Coronavirus: More ‘striking’ evidence BCG vaccine might protect against Covid-19
3 Bernie Sanders drops out of Democratic race for US presidential nominee
4 Coronavirus: Third-level students will not have to sit traditional exams
5 Lockdown exit: How can Irish economy reopen without big health risks?
Real news has value SUBSCRIBE