Newton Emerson: Something is stirring in Stormont 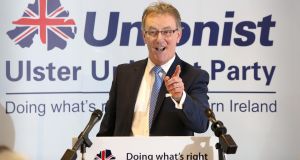 Nesbitt had been forced by disappointing poll results to take a last desperate gamble, with no better plan than disrupting the environment and hoping for more favourable conditions. Photographer Matt Mackey - Presseye.com

In a process rarely seen in nature, Mike Nesbitt dramatically altered the UUP’s conditions last week as he walked out of negotiations on the new Executive to go into official opposition – where his party is to remain for the next five years.

Defending the move from DUP and Sinn Féin ridicule, Nesbitt’s predecessor David Trimble said the Belfast Agreement institutions were always “going to evolve”. Did that require the UUP selecting itself for extinction? The party had already entered unofficial opposition last September, following an IRA-linked killing. Government carried on and the UUP departure was soon considered a failed stunt. Nesbitt, clearly itching to get back into office, spoke of taking a ministry during last month’s election campaign.

The option of formal opposition only became available because the DUP and Sinn Féin allowed a Private Members’ Bill to pass two months ago, indicating they saw it as no threat.

So Nesbitt was forced by disappointing poll results to take a last desperate gamble, with no better plan than disrupting the environment and hoping for more favourable conditions.

For about a day last week, he seemed to be retaining his niche. Then the scale of the change became apparent.

Rumours began to circulate that independent Assembly members were being sounded out to take the Alliance Party’s place. The DUP and Sinn Féin were privately rattled. Then Nesbitt proposed that the two largest parties of government sit together in the Assembly, rather than on opposite benches. This was tetchily dismissed by Sinn Féin and the DUP. Now they were publicly rattled – and ridiculed.

Nothing more has actually happened at time of writing, yet suddenly Stormont is transformed. In a matter of days, opposition has gone from a potential mutation in mandatory coalition to an established branch of political life. It is a reasonable expectation of every party other than the largest nationalist and unionist parties, who may reasonably expect to govern alone.

The choices Northern Ireland’s voters will be offered could also be surprising. Sinn Féin and the DUP may still be embarrassed to sit together but they have by far the best record on working co-operatively. The UUP and SDLP record is lamentable, squandering their early years at the helm then failing to create any kind of joint vision since.

Stormont’s one true period of bonhomie was the 10-month pairing of Ian Paisley and Martin McGuinness, who became known as the Chuckle Brothers. This episode is considered too bizarre to be instructive – Paisley’s health was thought to be affecting his judgement and in 2008 the DUP hurried him off the stage.

Peter Robinson preferred a “tough but businesslike” tone, which Arlene Foster appears set to emulate. Yet Paisley’s judgement was basically sound. Having decided to form a government, you should govern with enthusiasm.

Opposition and a shrinking executive only emphasise this imperative. Voters may think they want two parties who stand up to each other but how sustainable a government is that once there are only two parties left?

Somehow, on their own terms, Foster and McGuinness need to evolve into the role of chuckle brother and sister. Implausible as that seems, it is more likely than Nesbitt having the last laugh.