Newton Emerson: Northern Ireland stinks of people not quite breaking the law 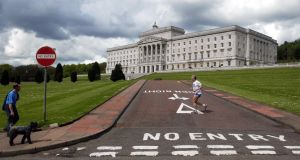 Stormont Parliament buildings: The problem goes beyond everyone knowing everyone else, or of our ‘elites’ being more of a brass ring than a golden circle. File photograph: Paul Faith/PA

I must confess to a provincial thrill at Northern Ireland’s Nama scandal – and I may not be alone. Last week’s BBC Spotlight investigation featured hidden footage of Frank Cushnahan, the fixer at the heart of the controversy. But the programme also featured gorgeous footage of Belfast at its most sunlit and bubble-built, interspersed with shots of big city lawyers, financiers and regulators in London, Washington and New York.

It was as if we had finally graduated from a Ross Kemp documentary to a John Grisham novel – which is progress of a sort, even if Grisham’s novels are always the same old story.

Transparency International ranks the UK and Ireland as the 10th and 18th least corrupt societies on earth but warns that both have high levels of “lawful corruption”, defined as political favours, donations and relationships that influence decisions and policy. Northern Ireland, somewhere between both countries, concentrates this culture in a tiny region that parodies the legal and political systems of a nation. The problem goes beyond everyone knowing everyone else, or of our “elites” being more of a brass ring than a golden circle. The security environment feeds paranoia and is used to justify secrecy – political donors are kept anonymous, for example. A political context of all-party peace processing mitigates against internal and external scrutiny. The economy is so dominated by public spending that the private sector is reduced to clientalism. Nobody in Northern Ireland would expect to be asked for a bribe but the whole place stinks of people not quite breaking the law.

Arrangements around the £1.24 billion sale of the Nama portfolio are currently the subject of a police investigation, led by the UK’s National Crime Agency (NCA). While we wait to see if anyone has committed an offence, what everyone is mostly being accused of is breaching guidelines, professional codes and due diligence, or of failing to uphold standards, declare interests and stay on the right side of Chinese walls. The distinction between this and illegality is confused by catch-all laws against fraud and misconduct in public office, creating a sense that everything is simultaneously right and wrong until the police look at it – quantum corruption, if you like.

In the Nama case, for instance, a £7 million fee to a Belfast law firm was moved by one of the partners to the Isle of Man. When the other partners found out, they reported this to the Law Society, which archaically in Northern Ireland both represents and regulates solicitors.

Assembly member Jim Allister, leader of the Traditional Unionist Voice and a Queen’s Counsel, was among those who asked why the PSNI did not intervene. However, the police made it so clear they did not want to be involved – declaring they had not “received a complaint” – that in the end, absurdly, Allister had to make a complaint himself.

This is a repeating pattern. In 2014, BBC Spotlight alleged widespread misuse of Stormont expenses. Allister forced the PSNI to investigate. Last month, this investigation was closed after police said they could not proceed without the help of “the regulatory authorities at Stormont” – comprising the parties under investigation.

The Nama story publicised a nexus of business and politics, with allegations that may have hastened the retirement of DUP leader Peter Robinson – but only for electoral reasons, as even the innocent can be punished at the polls. In 2010, Robinson lost his Westminster seat after reports of property deals and links to developers, yet he was subsequently cleared of any wrongdoing by separate council, Stormont and police investigations.

Any frisson of gravitas in the Nama nexus is belied by the role of Jamie Bryson, a 25-year-old flag protester and Robinson’s main accuser. The young loyalist’s blog suddenly appeared so well-informed that Stormont and Dáil committees summoned him for testimony.

His unique contribution was to have no fear of Northern Ireland’s libel laws – reform of which is rather conspicuously blocked by the DUP. Journalists covering Northern Ireland’s biggest financial scandal are painfully aware that the only unlawful thing to emerge from it could be a civil offence of writing about it. How would that score on international transparency?

Ironically, the DUP fought hard against nationalist objections to bring the crime agency to Northern Ireland, just in time for the Nama story to break. However, faith in the so-called “British FBI” looks pathetic. The NCA is an untested organisation formed after the failure of its direct predecessor.

That predecessor had an offshoot in Northern Ireland – the Assets Recovery Agency – that, for a brief period a decade ago, promised muscular financial oversight. But it had no remit over the public sector and ended up doing little more than waiting for loyalists to shoot each other so it could confiscate their houses. It was not even particularly good at that.

Northern Ireland’s best hope of an occasional clean-out is that its brass rings come to grief through their own greed, arrogance and amateurism.

The Nama saga suggests this mechanism remains as reliable as ever.