Newton Emerson: All Arlene Foster is learning in office is arrogance

Brusque DUP First Minister needs to tone down the tantrums 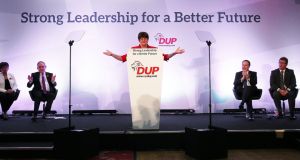 Arlene Foster could lead unionism broadly and generously. She cannot do this with petulance and bad grace. Photograph: PA

Arlene Foster has met the Taoiseach to discuss Brexit, putting a dispute over poaching investors behind them.

The DUP leader started the row two weeks ago at her party’s conference and she did have a point – Dublin has openly sought to exploit Brexit for inward investment, against the UK overall if not against Northern Ireland in particular.

But did Foster have to make her point so provocatively and for such petty ends?

The accusation of “talking down” Northern Ireland to “poach our investors” followed a line in Foster’s conference address – her first as leader – in which she said relations with the Republic are “probably as good as they have ever been”.

So it looks like a diplomatic bombshell was dropped just to avoid sounding too soft on Southerners before the party faithful.

There were better ways to raise this issue with Dublin if resolving it had been the main priority.

Foster’s brusque manner has been noted throughout her political career. It  has clearly not impeded her rise. Given that her mentor was the famously angry Peter Robinson, brusqueness may even have helped. But Robinson toned his tantrums down as soon as the office of first minister was in his sights. Foster continues to be the same curt curmudgeon she has always been, picking fights that are now beneath her and speaking in ways no-one would call presidential (at least before last Tuesday.)

While Foster waited to succeed Robinson, she spent over seven years as Stormont’s minister for enterprise – a record tenure, despite a mediocre record. There she presided over a disastrous green energy scheme called the Renewable Heat Incentive (RHI), which subsidised biomass boilers. Its key flaw was laughably obvious – there was no cap on usage, unlike the English scheme it copied. So there was nothing to stop farmers and businesses heating empty barns and warehouses around the clock, which they duly did, incurring a taxpayer liability of £1 billion.

The assembly’s Public Accounts Committee has just begun hearings into this fiasco and serious embarrassment is expected. Last week, a senior official conceded it was “one of the biggest scandals since devolution”.

“I think some of the people who were sitting on that committee need to look at themselves,” she said – presumably not including its DUP members.

This behaviour suggests that all Foster is learning in office is arrogance. She is Untouchable Arlene now, the boiler who cannot be scrapped.

Nationalists certainly feel their First Minister has been arrogantly dismissive of their Brexit concerns. The DUP’s tricky position on EU departure, at odds with the majority in Northern Ireland, has not been reflected with humility from the top.

This has led to speculation that Sinn Féin must eventually lose its temper and pull the plug on the Fresh Start agreement, which marks its first anniversary today. There is no sign of this, however. Sinn Féin and the DUP are locked in co-dependency and they know it. Foster always manages to be civil to Martin McGuinness, the Deputy First Minister. Why would republicans care if she makes unionism look bad to everyone else?

Some vision of what unionism stands for, beyond ethnic majoritarianism, is more urgently required than ever as it slips below an outright majority. With her compelling personal story and lack of hardline baggage, Foster could lead unionism broadly and generously. She cannot do this with petulance and bad grace.

There has only been one tentative sign of moderation to date. Foster is permitting the Executive’s Independent Justice Minister to pardon gay men convicted of abolished sex offences.

This is an arm’s length gesture, which any legal challenge would have forced on her regardless. Foster accompanied it by reiterating her objection to same-sex marriage.

If this reveals any liberalising tendency, it mainly indicates how very slowly she intends to proceed – and of course, that is the classic failing of all unionist leaders: reform, but too little, too late. The tragedy is that Foster could do so much better.