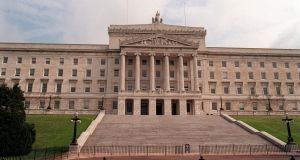 A federal Ireland, a union with Scotland and a North devolved from the South are among the ideas being seriously suggested for a post-Brexit united Ireland.

Why is nobody proposing the safeguard that already exists in Northern Ireland – mandatory powersharing?

It is by far the most straightforward approach, avoiding elaborate territorial arrangements, guaranteeing unionists a role in government and not trapping northern nationalists behind any kind of continuing Border. Even Sinn Féin appeared to underestimate the latter consideration with its recent musings on Stormont surviving unification. How unbearable would the frustration of northern nationalists be if a united Ireland finally happened and they were still not properly part of it?

Southerners may feel a unified state would not require safeguards on the level of mandatory powersharing. That casual arrogance is precisely why such protections would be necessary. “Good enough for you, not good enough for us” is a disastrous attitude with which to embark on the tricky merger of two peoples and jurisdictions.

Chief among the delights of a united Ireland promised most often to unionists is that they would go from a tiny minority in Westminster to a significant minority in Leinster House. However, they have no more assurance of real influence there than in London.

It is commonly said unionists would work with Fine Gael but this mainly seems to be said to insult Fine Gael. In practice, southern parties might be extremely reluctant to risk untested unionist partnerships, certainly in the early years of a united Ireland, when a demonstration of acceptance would be most crucial.

Coalition building could be unwieldy even for the willing. Unionist representation is spread over multiple parties – I have included six in my calculations for this article, not counting Alliance.

The shock of unification could consolidate the unionist vote, or make it melt away, or cause it to grow for assertive or defensive reasons. About half the North’s Protestant population generally does not vote. But even if they all cast a ballot for just one party and everyone else’s turnout stayed the same, a place in government would still be far from guaranteed.

Stormont’s mandatory powersharing has recently evolved from the complexities of the Belfast Agreement into a much simpler form, where only the largest each of the unionist and nationalist parties must be in office. Transposing this to an all-Ireland setting would mean guaranteeing the largest unionist party a place in coalition. The DUP would assume that meant it forever, so it might be tempted.

Executive ministries at Stormont are officially allocated by formula, according to each party’s assembly seats. If a united Ireland kept the South’s 15 government departments, unionists could expect to control two of them. However, as unionists would usually be a very junior coalition partner, the formula would heavily restrict their choice. Unofficially, it has been clear for some time that Sinn Féin and the DUP negotiate their Belfast cabinets in advance, so the DUP should be amenable to a less formulaic system in Dublin.

Stormont has cross-community protections in the assembly as well as the executive. Votes on contentious issues can be forced to require a majority of unionists and a majority of nationalists to pass, if just over a quarter of assembly members raise a so-called petition of concern.

The petitioning mechanism is felt to have been abused but there are few complaints about the double majority requirement itself, probably because Stormont’s unionist and nationalist blocs are of comparable size.

This would not be the case in an all-Ireland parliament, so there would need to be higher triggering thresholds and a tighter definition of “contentious” to avoid a sense of the tail wagging the dog. That concern aside, cross-community voting is such an effective measure that it should be considered worthwhile entirely on its own.

How long power-sharing might last after unification is one of the questions that illustrates why it would be needed. When is a minority secure among a majority? That leaves the matter of who would underwrite powersharing’s assurances. The British government enforces the rules at Stormont and can suspend devolution. That would never be acceptable in a sovereign, independent Ireland, so who would be unionism’s ultimate protector in a 32-county Dáil? Delightfully, it would have to be Europe.