My knockout encounter – An Irishwoman’s Diary on Muhammad Ali, Dolly Parton and me 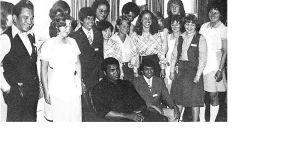 Muhammad Ali in Copenhagen’s swish Hotel Scandinavia in 1980. Maura O’Kiely: third from right; the bubble-permed hotel DJ is directly behind her.

We knew something was up when the supervisor from the hotel’s housekeeping section appeared on our floor. “Go up to the penthouse suite immediately,” she instructed us. “You’re to get your photograph taken with a guest.”

In the lift we straightened our aprons and pulled up our knee socks.

And who was it? A whole gush of celebrities had stayed in the top-floor penthouse suite those months in 1980. I had been dispatched there one evening to take Dolly Parton’s dinner tray away.

Dolly herself had answered the door, almost unrecognisable without her trademark wig. (She never pretended those big blond wigs were anything but fake; when asked by a reporter how long it usually took to get her hair done, the effervescent country singer had replied, “Couldn’t tell you, honey. I’m never there.”)

On the top floor a few staff from reception were already gathered. In all there were 16 of us. The new hotel manager wanted a photo of a top-drawer guest hob-nobbing with employees for the in-house magazine.

A Danish receptionist said it was Muhammad Ali, who was staying there with his wife, Veronica.

We were thrilled. Muhammad Ali, on the verge of retirement but still a supernova sportsman of intergalactic magnitude and one of the most recognisable faces on the planet. In your face, David Bowie!

The photographer, prodded by the night manager, began arranging us in a group, and I made sure I was standing in front of the DJ.

He took no notice of me whatsoever and I took no notice of Ali, now seated, who the others later said was sweet-natured, relaxed and very friendly. They also said, again and again, that he was breath-takingly handsome, and witty, and seemed delighted by the invasion of below-stairs staff.

I was barely aware of the chatter, though – to my delight, Bubble Perm was now trying to undo the bow on the back on my apron. Progress!

The photo session was over in a few clicks; so photogenic was Ali that a couple of shots were enough.

We all shook his hand and trooped out. The shoot had taken just minutes.

I hurried into the lift and placed myself beside the DJ, now busy chatting up one of the receptionists. He left for pastures new shortly afterwards and I never saw him again.

The photo duly appeared in the hotel magazine. In it I am looking down, smiling but disengaged, probably wondering if my undone apron is going to fall off.

The accelerated throbbing of the heart is a subjective thing, that’s why.

For some reason a boy with silly hair had made my heart beat faster than the man US president Barack Obama is calling “The Greatest. Period.” For the millionth-billionth time, I wished this week I could go back in time and fix this. Too late now, missy.