‘By 1966, the support vehicle mechanics at the airline had long been in a dispute over a request for proper clothing for the cold months’ 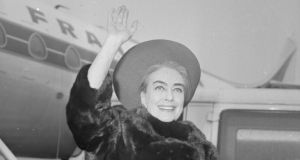 ‘The Montague was set on its hook again, until Cecil heard Joan Crawford was due to fly in to Dublin Airport.’ Above, Crawford waving to photographers at London airport in April 1966. (Photo by Dove/Express/Getty Images)

My grandfather was tinkering with a new take on renewable energy when he fell ill. He’d built a machine which he hoped would one day be capable of powering his house. Later, the rest of the street.

I’d never seen it, but I told people about the machine. I said things like “If I’m like that when I’m 88, I’ll be laughing”, but I never took the contraption as seriously as perhaps I should have.

When he died in September, it went to the back of my mind, until I saw it for the first time while helping my mother clear his house.

In his shed, behind his poky bungalow in the inner city, two large, black plastic tubes stood upright in the corner. Wires poured from their bases, connecting to a mesh of coiled extension leads that grew like roots around rusted tins from long-extinct tobacco brands.

At the top, a bicycle chain sat on a standard set of gears, with either end disappearing into the openings at the top of the cylinders. The tubes were filled with water – I knew that much from our conversations about the machine – and the concept was to use buoyancy and a system of floats to generate energy – all within the space of a shed.

The machine, ostensibly, worked. It lit a bulb at one point, but my grandfather never got the juice he wanted out of it without the intervention of an external power source at certain intervals. He’d intended to return to it.

My mother and I stood in the little stone room and marvelled at the complexity of the project.

I imagined him drilling bits to other bobs on sunny days, wearing his white shirt and immaculate braces. I didn’t tell my mother, but I was actually looking for another contraption of his, which solved another problem at Dublin Airport in the 1960s. I was looking for The Montague.

The Montague is a coat. A bad coat. A coat my grandfather, Cecil, procured half a century ago as part of a wider campaign to get a series of new, better winter coats for his colleagues. “It was a long thing,” he said to me on an afternoon visit last year. “I put grease on it – oil, too.” It was ripped, he recalled, pointing vaguely to points on his chest where he remembered the holes. There was a thin cord for a belt that closed it. It was exactly what he needed.

By 1966, the support vehicle mechanics at the airline my grandfather worked for had long been in a dispute with management over a request for proper clothing for the cold months. The airplane mechanics were kept happy in all-weather gear; the support vehicle workers, less so. (Nothing unusual there, I was assured.)

Cecil, then shop steward and member of the chillier group of mechanics, digested the realisation that polite requests weren’t warming anybody. Plan B was to go about his work in a garment so terrible it would inspire management to relent out of embarrassment.

The first time he donned The Montague, the head of Dublin Airport came in for an oil change. He pulled around to the garage, and asked to see the best mechanic. Cecil dutifully responded and pretended not to understand the confusion when the driver reeled and asked him who he was.

The airport head later mentioned the dishevelled-looking worker to other higher-ups, but nothing came of it. The Montague was set on its hook again, until Cecil heard Joan Crawford was due to fly in to Dublin Airport; the movie star and brand ambassador for Pepsi was on tour promoting the drink.

The big day came and the “top brass” turned out to form a welcome party at the stairs to the jet. Timing, for Cecil, was imperative. “I had to wait until the plane was on the ground to make my move,” he told me, describing the line of suited-and-booted executive types with plastered smiles and shiny sleeve buttons.

The plane landed. The stairs were in place. Eyes focused on the aircraft’s door just long enough for Cecil to sneak across the tarmac and squeeze in between two confused suits as Crawford came down the steps, bulbs flashing as she passed.

This stunt, a more high-profile outing for The Montague, sufficiently mortified the bosses. “The next week,” Cecil said, “we all had proper coats. Brand new.”

I searched deeply, through boxes filled with circuit boards and underneath thousands of pages of electronic diagrams and inventions, but couldn’t find The Montague among the items of a life spent fixing. It didn’t surprise me that he had not kept it. Cecil was a mechanic; a practical man in search of solutions. The Montague had done the trick, and there had undoubtedly been something else to open up and improve.

Dean Ruxton is the author of When the Hangman Came to Galway: A Gruesome True Story of Murder in Victorian Ireland (Gill Books)