Migration in the Mediterranean: the toll on humanity

Rosita Boland: ‘I watched as migrants from Syria, Bangladesh, Mali and Nigeria took their first steps on land since embarking from Libya on boats they knew could as easily transform overnight into their coffins’ 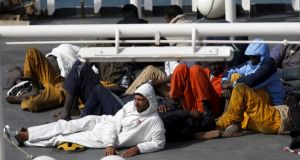 Surviving immigrants lie on the deck of Italian coastguard ship Bruno Gregoretti in Senglea, in Valletta’s Grand Harbour on Monday, April 20th, 2015. Some 700 migrants were feared dead after their boat capsized in the Mediterranean. Photograph: REUTERS/Darrin Zammit Lupi

Last September, photographer Frank Miller and I spent a week in Sicily reporting for The Irish Times on the story of Mediterranean boat migration. We criss-crossed the island that week, between ports and refugee centres and the train station of Catania. The week was an insight into the complexity of migration from Libya, which by definition, is an ever-moving and changing story, as the tragedy of a mass drowning this week in the Mediterranean has proved again.

At Porto Empedocle in southern Sicily, we witnessed a landing of 290 people from two different boats that had been rescued by a Dutch cargo ship the previous night. Any ship’s crew that sees people in peril at sea is obliged to go to their help, and a crew of just seven on a commercial vessel saved those two boatloads of people. The sight of that ship coming into port with its unexpected human cargo standing silently on board is an image I will never forget.

I watched as migrants from Syria, Bangladesh, Mali and Nigeria took their first steps on land since embarking from Libya on boats they knew could as easily transform overnight into their coffins. The commonality of their expressions was utter exhaustion and relief. They had made it, unlike the 3,000 people who had already drowned that year in similar circumstances.

Migration is always about people. It’s about people driven by war, persecution or economic necessity, who take huge risks to reach a better life. Migrants have many faces, and everyone has an individual story. But almost all of that visceral reality and ordinary human dignity gets lost when the scale of migration is as big as it currently is in the Mediterranean.

In 2013, the number of people crossing from Libya to Italian territory was 42,000. Last year, it was 170,000. They are huge figures, and increasing all the time, as the migration continues. It’s estimated there are 300,000 people waiting in Libya to attempt the crossing.

At the end of the pier at Porto Empedocle I saw old Libyan fishing boats from which former migrants had been rescued. The Italian Navy had retrieved them from the water and brought them ashore. There were some half a dozen small boats askew on the pier; rotting, decommissioned, unseaworthy boats in which no human being could set out to sea with anything but the greatest of dread. Yet it is boats like these, no more than five or six metres long, that set sail crammed with hundreds of people. The other vessels routinely used by traffickers are open rubber boats, which are even more dangerous.

Syrians I interviewed at Catania train station told of traffickers throwing their belongings overboard, so more migrants could be crammed in. The more people on board a boat, the more money the trafficker make, and the more grievous the danger to those aboard. The price Libyan traffickers were demanding last autumn was $2,000 a head. The profit involved in filling just one boat is often upwards of half a million dollars each time. The boats are more precious to the traffickers than the people in them: they regularly lurk in the distance on a separate boat so that once people are rescued, they retrieve the boats and fill them again.

In the past week alone, more than 700 people are believed to have drowned while attempting the crossing; a horrific loss of life that is making global headlines. We will never know all their names, or what circumstances drove them to knowingly risk their lives.

There was what seems a ghastly inevitability to the most recent tragedy. In October 2013, the Italian Navy’s Mare Nostrum mission started, as a direct response to the numbers of those drowning in their attempts to reach Lampedusa, Italy’s southernmost island. At the cost of €9 million a month, Italian naval boats patrolled the waters between southern Italy and Libya around the clock, actively searching for boats in distress. They are credited with saving more than 150,000 people.

Mare Nostrum could not continue indefinitely, and in November last year, Frontex took over instead. Frontex, an agency of the EU, has a budget of only €3 million a month. It does not have the resources to conduct a search and rescue mission on the same scale. Frontex’s inability to manage the crisis was evident in the loss of 700 lives this week from one ship; the single biggest Mediterranean disaster to date.

It’s dangerously easy to dehumanise a huge cohort of continuously mobile and anonymous people by allowing them to mean no more than numbers. We cannot do that. If we do that, we lose our own humanity. We need to put pressure on the EU to take collective responsibility for the people risking death in their desperate journeys to Europe.