The promise of change, renewal, reform is a very powerful political trope 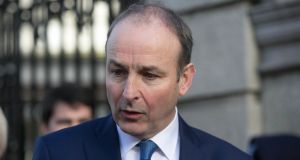 When the referendum on same-sex marriage was passed in 2015, the world marvelled at how Ireland had changed. Once a byword for austere Catholic conservatism, suddenly we had become the first country in the world to endorse marriage equality in a popular vote. Truth to tell, we were probably surprised ourselves.

But Ireland didn’t change on a day in May 2015. The change had taken place over a long period of time – first slowly, then quickly. Events such as the referendum make clear the change that has already occurred. They crystalise it. But the change itself is a process, not an event.

The extraordinary change in Ireland’s economy in the 1990s and 2000s was easily measurable in GNP, in imports and exports, in income per capita, in numbers employed, holidays taken, consumer spending, in house prices.

The changes in society and in social attitudes – some of them certainly accelerated by growing wealth – were more noticeable at a micro, personal level, in the way people lived their lives, the way they expressed their attitudes. For that reason, they were less obviously impactful in politics. And conscious of the culture wars over abortion in the 1980s and 1990s, many politicians shied away from addressing social questions and proposing reforms.

Perhaps the greatest change is in relation to the place of women in national, political, professional and domestic life. Yes, women are underrepresented in many leadership positions, including in politics. But that’s changing. We have had women presidents, chief justices, tánaistes , television anchors and newspaper editors. But more important has been the change in people’s personal lives. Think about it: how many men do you know who regard themselves as the “head” of their household, as the census used to put it? The current effort to change the law on abortion is just one of the ways that this change is manifesting itself. Politics is the crucible of our national life.

It’s not that women are more in favour of abortion than men are. Opinion polls are consistent in finding that men’s and women’s attitudes to the issue are remarkably similar. Rather, it’s that the public and political debate – and this was starkly evident in the two day-Dáil debate on abortion during the week – is now focused to a greater extent than ever before on the needs and rights of women.

Look at Micheál Martin’s speech. He explained he had always defended the Eighth Amendment because it had protected the unborn. But his justification for changing his mind was wholly grounded in concern for women. The balance in his thinking has swung away from the unborn towards women.

What his speech also shows is that the great change is not simply a matter of demographics, not a matter of one generation replacing another. If it was, the change would be much slower than it has been. It’s not that members of an older generation are being replaced by their younger, more liberal children. It’s that many members of the older generation have changed their views. That is a more remarkable thing, in many ways.

Political leaders are often the best analysts. But they don’t share their honest analysis with the world. You have to infer it from their actions.

But as well as analytical ability and judgment, a successful politician also requires a more inchoate quality: instinct. A sort of a sense of political smell. An intuition, gleaned from their incessant contacts with the public, of what voters want, and where they are on specific issues. It’s fair to assume that Martin did not switch this quality off when he was considering this issue.

I don’t doubt that Micheál Martin’s conversion from a pro-life position to a pro-choice one is genuine. It’s a change of mind that many of his contemporaries have also undergone. But you cannot take the politics out of politicians – often their own views are highly influenced by those of the people they meet.

Actually, we expect our politicians to reflect our views. That’s a central part of the Irish political culture and system. Irish politicians remain in closer touch with the public than politicians in most countries. Politicians who aren’t influenced by the views of other people tend not to get elected, or at least not to get re-elected.

I think Martin discerns a change in public attitudes on abortion. I think he believes this referendum is going to pass.

Conservatives and those who believe that unborn children have a right to life can justifiably ask: who speaks for us? But Micheál Martin’s answer is clear: not me.

Opinion polls suggest there is a great deal of caution among voters about extending abortion on request. But they also say that people are certainly ready for a change, and politicians can sense it.

I don’t know – nobody does – whether the referendum will be passed, though you’d have to say that the wind is in the sails of the repeal side. Now that there is some clarity on the question to be asked, and crucially on what would replace the outright ban on abortion, the next opinion polls will be instructive. But I do know one thing – Ireland has changed dramatically, and that change will continue to exert its irresistible gravitational pull on our politics.

As politicians understand this, they will respond to it. The promise of change, renewal, reform is perhaps the most powerful of all political tropes. As politicians jostle to outdo each other, the pace of change is likely to accelerate. Hang on to your hats.