We arguably already have too many small basic apartments 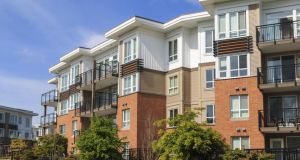 Among our fastest growing age groups are the under-14s and over-65s – groups of people who are naturally unsuited to small apartment living. Photograph: Getty Images

An increasingly common argument is that minimum building standards are contributing to Ireland’s housing problems. The logic is that burdensome regulation is choking development activity and driving up property prices.

The regulation of new housing development has evolved dramatically over the past 20 years.

Changing density guidelines mean that apartments have become the de facto form of housing development in many urban areas. At the same time, the specification and average size of these apartments has risen due to higher design standards. These set out minimum requirements for floor areas, room sizes, storage space, etc. They also regulate the proportion of smaller one-bedroom units that can be included in schemes.

As many of these changes were introduced after the property market had collapsed they attracted little attention. However, now that the appetite for housebuilding has returned, opposition to the new rules is growing.

Developers are among the critics and their frustrations are understandable. While modern density requirements mean apartments are often the only realistic form of residential development, these properties are more difficult to phase than traditional family housing. Developers then have to incur the costs of building an entire block of properties before they can start selling. Ultimately this forces them to take on higher levels of peak debt – which is exactly what is not needed when development finance is thin on the ground.

Improved standards are therefore among the factors impeding residential construction. Given the problems this creates – homelessness, long commutes, personal indebtedness and knock-on wage claims – there have been calls for a return to more relaxed design standards.

One argument goes that, in an economically diverse society, there should be a range of dwellings to suit every pocket and everyone should not be forced to buy a Rolls-Royce apartment.

Plausible as it seems, this argument founders on a failure to distinguish properly between stocks and flows. Between 1994 and 2007 a stock of more than 160,000 apartments was built. As these predate the Department of the Environment’s design standards for new apartments, most were small units, built to basic specifications. In the years since 2008 there has been a flow of larger, better quality apartments. But this flow has been minuscule relative to the pre-existing stock.

The real problem is that our large stock of small, basic apartments is not being fluidly traded because the occupants of these properties don’t have anywhere to trade up to. In this sense, bigger family-friendly apartments are the solution to the problem, not its cause.

This leaves us with a conundrum. We urgently need more family housing and, given current density requirements, large good quality apartments are a sustainable way of meeting this need. But the cost of building these units is prohibitive at current prices. As such the cost base needs to be reduced.

Certainly, some aspects of current design standards are questionable; for example, do we really need one parking space per apartment in Dublin city? Or do 85 per cent of new apartments in every scheme need to be dual aspect?

However, if we want families to view apartment living as a viable, long-term option, we should not focus our policy efforts on scaling back the size and quality of apartment dwellings.

Instead we should look for cost-savings elsewhere. Given the limited range of options, a good starting point would be to reconsider local authority development levies and VAT on new homes. As it stands these are pitched at a level that serves nobody.

By adding to costs they are blocking development and depriving society and the economy of much needed housing. But they are also cutting off potential revenue streams to central and local government that should be flowing from construction activity. Surely it is better to have a smaller percentage of something rather than a big percentage of nothing?

Dr John McCartney is director of research at Savills