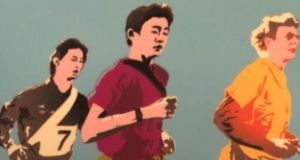 From the cover of The Way of the Runner – A Journey into the Obsessive World of Japanese Running, by Adharanand Finn

Away from the rugby this weekend, many Japanese sports enthusiasts will be preparing for the start of something called Ekiden season, which is from November to March, and has vastly higher participation and spectator rates than most ball games.

It’s a form of running, in long-distance relays, and I had never heard of it until returning from Japan last month.  But now I suspect that, while there, I accidentally participated in one of the training sessions.

Feeling like exercise one evening in Tokyo, I took a Metro across the city to Shibuya, and from there walked to Yoyogi Park where, I had read, a group of expatriate runners called Namban Rengo met every Wednesday.

The name means “Barbarian Horde”, a joke echoing the description of the first Portuguese sailors to visit Japan.  But I turned up late and, the park being big and dark, couldn’t find any obvious Barbarians.

What I did find were about 40 Japanese runners in several groups doing “interval” training (fast sections interspersed with short recoveries over set distances) on a kilometre loop. And having come such a long way, I decided to join in.  It’s not like football, after all, where you’d have to ask permission. The glory of running is that you can do it alone, together.

So I togged out behind a shrub, insinuated myself into a gap between the passing groups, and then hung in as well as I could for several laps, even responding occasionally to the leader’s urging for a final sprint – “San, Ni, Ichi!” – which I knew from my Duolingo Japanese meant “Three, Two, One!”. And that was it. I went home sweating profusely yet happy, having otherwise exchanged nothing more than friendly glances with these strangers in the night.

But since then I’ve been reading a book called The Way of the Runner – A Journey into the Obsessive World of Japanese Running, by Adharanand Finn – which goes into great detail about ekiden.

Among its lesser revelations was another language lesson: that the common Japanese suffix -do, much used in martial arts, means “path” or “way”.  Hence judo, the “gentle way”, kendo, the “sword way”, aikido, the “way of harmonious spirit”, and so on.

Although there is no “do” in ekiden, it is a typically Japanese method of turning something as individualistic as running into a team event. All countries have relay races, but nowhere else is it the most popular form of the sport. It’s big business in Japan too. Major companies hire star athletes for their teams, which means there are more professional runners per capita in Japan than most places.

On the downside, the ekiden obsession comes at the expense of other disciplines. Good mile runners, for example, are underappreciated: they tend to get press-ganged into 5ks, the shortest Ekiden leg, even if it doesn’t suit them.

Another paradox is that the distance-relay phenomenon does not translate into producing track or marathon stars at the highest international level. It’s all Kenyans and Ethiopians there. But just below those is a vast army of Japanese running at elite standard. Blanket finishes are common. In one 5k time-trial Finn watched, the slowest of the first 30 men home had taken just 14 minutes and five seconds. If you ran that fast in Ireland, you wouldn’t have much company.

Despite the book’s title, there is less overt philosophy among Japanese runners then you might hope. Finn’s search for athletic enlightenment included a trip to the famous “Marathon Monks” of Mount Hiei, who undertake 1,000 marathons in 1,000 days (most of it walking, in fairness): the equivalent of circumnavigating the globe.

When he eventually secured an interview with one of the 46 who had ever completed the task, the man appeared to be still well short of Nirvana. It was just a good way of clearing the mind, was the gist of his answer to the question of why one should run.

Since I often ask myself the same thing, especially this time of the year when the nights are dark and Dublin running routes grim, Finn’s book also sent me back to one I read some years ago by the great Japanese novelist Haruki Murakami.

In What I Talk About When I talk About Running, Murakami defended his athletic habit, as something frowned upon.  Especially in Japan, he said, people assumed writers to be “somewhat degenerate” by necessity. They worried that any clean-living habits might threaten his creativity.

They were right about the mental hazards of being a novelist, he thought. But that was his excuse, even his motto, for running in advanced middle age. “An unhealthy soul requires a healthy body,” he wrote, and I suspect this applies to mere daily newspaper columnists too.