Kathy Sheridan: What if Bertie had been in Brussels negotiating for the Greeks? 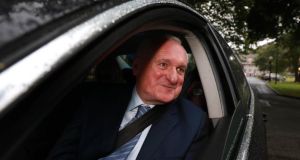 Over the weekend, someone argued quite seriously that if Bertie Ahern had been in that Brussels meeting last Sunday week negotiating for the Greeks, there might have been a different outcome.

It’s probably symptomatic of Bertie’s double-edged legacy that the idea provoked a bout of strangled laughter, then a string of profanities followed by a noisy debate. After which it took on the look of a plausible thesis. To get to this point of course, you must first have had some strong drink, then acquire a memory eraser to delete all those hours of deluded, self-exculpation at the banking inquiry. Having done that, your brain will be free to focus on his role as a negotiator in the Belfast Agreement.

By all accounts, the “mental waterboarding” allegedly inflicted on Alexis Tsipras over 16 hours in Brussels was a gentle splash by comparison with the interminable, tortuous, tongue-biting, sleep-deprived ordeal endured by the Belfast negotiators. It was, by common consent, Ahern’s crowning achievement.

Sometimes we need a reminder. A glance at this paper on Monday was to be assaulted by Margaret McLaughlin’s fine photograph, taken last Saturday in Derry. Masked men parading in paramilitary garb, faces concealed behind the sunglasses and scarves traditionally favoured by brave boys everywhere. They were leading the massive funeral cortege of republican Peggy O’Hara, mother of Patsy, an INLA hunger-striker who died 34 years ago.

It was a reminder of how slim is the veneer between barbarism and civilisation. That Belfast Agreement which Bertie helped to negotiate just 17 years ago demanded a high price of Irish people in terms of early release and moral fudge. But it worked. In its various fudgey components, it demonstrated the unsung cunning of Mother McCree’s dog, the mutt derided for its habit of going a bit of the road with everyone. Such is that dog’s notoriety, our leader-writer compared him to Bertie on Saturday.

But is going a bit of the road with everyone necessarily a bad thing? Might it just be another way of describing negotiations that allow all parties to come away with something and crucially, stop the bloodshed or halt the slide into anarchy?

The Derry photograph makes the heart sink, but it also reminds us of the pearl that is a skilled negotiator, the man or woman prepared to leave ego outside the door (no small feat for politicians), take advice, absorb all manner of provocation and work through the tide of obfuscation with endless patience, political calculation and gut instinct. There is a view that it was Bertie’s general lack of conviction and old-school political nous that allowed him to enter such talks with the requisite open mind and patience. So be it.

We saw the fall-out in recent weeks when one side in the Greece-euro zone negotiations was led by a minister who came garlanded with academic credentials but was a political novice. Academic achievement is no guarantor of success in a scenario where there is no single solution. Those talks as (almost) everyone now knows, were as much about politics back home as about the best evidence. Something as trivial as personality should be irrelevant when it comes down to the fate of a country and its suffering people, but until such face-offs are capable of being sorted by computers, they won’t be.

At one euro group meeting back in February, according to one report, Yanis Varoufakis had to be pulled off negotiation duty because he had spent most of the session “lecturing” his counterparts (in the counterparts’ view, that is), then leaked a confidential draft communique to the press room after he sensed the meeting was going against him. Rightly or wrongly, what were his or Greece’s chances of getting a sympathetic hearing after that?

Very few of us could do it. Moral outrage and/or an allergy to sanctimonious martyrs, wafflers and hectoring bureaucrats would probably have us yanked from the session inside an hour. The best of politicians are not necessarily the most admirable.