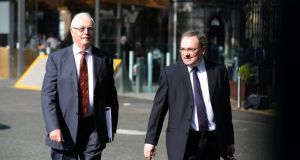 Try as it might, the National Asset Management Agency cannot wash its hands of the controversy surrounding the €1.6 billion (£1.2 billion) sale of its portfolio in Northern Ireland.

Frank Daly, Nama’s redoubtable chairman, made a decent fist of trying to distance the agency from the carry-on up North at Thursday’s meeting of the Dáil Public Accounts Committee (PAC). He told it that on foot of discussions with the UK National Crime Agency (NCA): “It is our clear understanding, based on that engagement, that their investigation is not in any way concerned with the Nama sale side of the transaction.”

Nama’s position is deceptively simple. It sold the portfolio and collected all the money it was due. Any shenanigans that might have gone on between the buyer, their advisers and Northern Irish politicians has really nothing to do with them.

Indeed, as Daly told the PAC, the focus of the NCA inquiry “appears to be very much on the purchase side and what may or may not have taken place in Northern Ireland”.

As a result he sees no reason why Nama should appear before the Stormont committee looking into allegations that politicians and business figures in the North were to share a £7 million payment in connection with the deal.

This no doubt reflects the best legal advice money can buy. But when you look at the history of the transaction, Nama’s position does not really hold water.

Pimco informed Nama that its compliance staff – the people who make sure rules are followed and the law obeyed in big corporate transactions – had discovered that a “£15 million fee arrangement fee” was built into the transaction. The fee was to be paid to well-known Northern businessman Frank Cushnahan, Belfast law firm Tughans and US law firm Brown Rudnick. Pimco then walked away from the deal.

Nama then began negotiations with another large US fund, Cerberus, and eventually sold it the portfolio for £1.2 billion. It did so in the knowledge that both Tughans and Brown Rudnick were now advising Cerberus.

It had, however, taken steps to ensure that Cushnahan – who had been on Nama’s Northern Irish advisory board – was not involved.

Nama has yet to explain why the renewed involvement of Tughans and Brown Rudnick did not raise a red flag. It has also yet to explain what steps it took to ensure that whatever it was that so concerned Pimco’s compliance staff about their involvement could not occur in the Cerberus deal.

There were certainly some similarities. In July it emerged in the Dáil – via Independent TD Mick Wallace – that £7 million of the fees paid by Cerberus was diverted from a Tughans company bank account to the Isle of Man and was “reportedly earmarked for a Northern Ireland politician or political party”.

The account was controlled by Ian Coulter, the former managing partner of the firm.

Nama is far from stupid and we can only surmise it did not query the role of Tughans and Brown Rudnick because it was not legally required to. Why it seems to have taken such a narrow view remains a matter of conjecture but two factors are worth considering. The first is the pressure that Nama is under to wind itself up. The Government has made no secret of the fact that it would like to see Nama depart the national stage and getting out of the North is a big step in that direction.

You can only imagine that once Nama discovered this it could not wait to get out. Cleaning up its Northern loan book would have involved inflicting financial pain on a great many politically connected people. It would have been nothing short of a nightmare for an agency owned by the Government.

And that is the nub of the matter. Whilst its actions then and now make perfect sense from a business perspective and were entirely legal, they fall short of the governance standards that taxpayers might expect. Noel Whelan is on leave

1 Why are markets booming when a crash is on the way?
2 Bobby Storey: The IRA's planner and enforcer who stayed in the shadows
3 Full line up of junior ministers unveiled as Taoiseach accused by one TD of snub
4 Irish holidaymakers have been thrown under the bus
5 Who are the new junior ministers? All their profiles are here
Real news has value SUBSCRIBE