James Connolly Heron: Why we should pay tribute to the 1916 leaders

‘In honouring everybody in general, we commemoratate nobody in particular’ 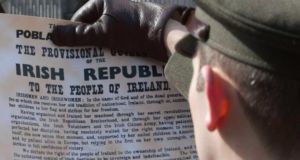 The planned evening event for 1916 relatives and the search for a venue to accommodate such large numbers announced this week is a belated though welcome recognition by the State of the huge national and international interest in the celebration of this pivotal event in our history and its ripple effect throughout the world.

Though the choice of a venue that has historic links to the Easter Rising such as the RDS would make sense, the expected numbers may dictate otherwise. The Convention Centre Dublin, given its location close to Liberty Hall, the spiritual home of the Rising, should be considered.

The Rising was the seminal moment in Irish history when, against all odds, a remarkable army of men and women fought in the cause of Irish freedom – theirs and ours.

The late Seán Cronin wrote of them: “None considered himself a hero but all were heroes. There were fewer than 900 of them and they challenged an empire. They were ordinary men and their military training was minimal. In that lies their glory. They believed that Ireland should be free. In that lies their greatness.”

It follows that they deserve to be remembered, honoured and paid due respect.

We now at last have an official State programme of commemoration for 2016 that is to honour and pay fitting tribute to them.

But the purpose and meaning of commemoration is not only to remember those who died – it is to remember and pay tribute. While there has already been a lot of talk of remembrance, there has been little by way of paying tribute. Why is this so?

So: who fears to speak of 1916? Who benefits from portraying the pivotal event in our history as just another event in a decade of historic events?

We are to remember “all” who died in a “shared history”, we are told. “Inclusivity”, the most-used buzzword emanating from those charged with the protection of our history and heritage; multiple wreath-laying for all combatants; royal visitors at commemoration ceremonies; and a planned GPO interpretive centre rather than a museum to the Republic.

In honouring everybody in general we commemorate nobody in particular.

Distortion of our history

Among their number were poets, writers, playwrights, teachers, musicians, journalists, actors, artists and ordinary working men and women – citizens – striving to create a society rich in cultural activity and identity. They contributed to the cultural revival of a defeated nation and they left us a legacy that needs to be embraced and cherished with pride: pride in our language, not a dismissal of it; pride in our flag, not a disregard for it; pride in our national anthem, not an apology for it; with trust in those elected to represent our interests.

There are 32 locations in our capital directly linked to that momentous event – 19 have been demolished completely, including Clanwilliam House, Carrisbrook House, Larkfield House, the Mendicity Institute, the Abbey Theatre and Liberty Hall.

Many of those that remain have been altered, some now unrecognisable, while others remain threatened by the wrecking ball. After years of neglect the national monument at 14 to 17 Moore Street is now to be secured and protected under the official 1916 centenary programme.

Since history is said to be most vividly learned and retained through experiencing the places where history happened, similar State intervention is now required to ensure the entire battlefield site is preserved and held in trust for future generations – a lasting physical reminder of those to whom we owe so much. Here we can walk in their very footsteps.

The 1916 Rising is their story but it is also ours – it is in our collective DNA.

James Connolly Heron is record secretary of the Save 16 Moore Street committee and founder of the 1916 Relatives Centenary initiative. He is a great-grandson of James Connolly and launched When the Clock Struck in 1916 – Close-Quarter Combat in the Easter Rising, by Derek Molyneux and Darren Kelly, (Collins Press)